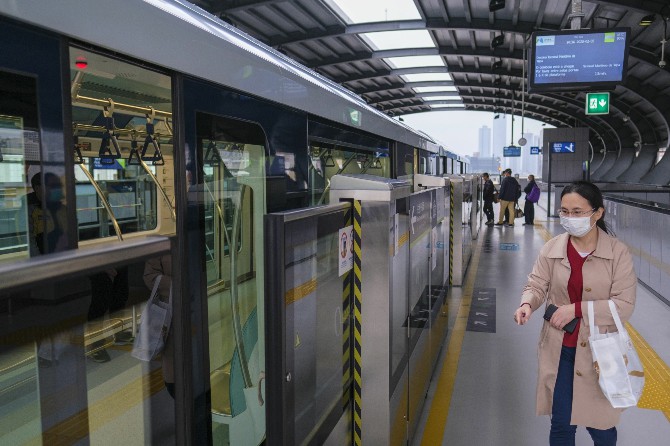 The Macau Light Rapid Transit (LRT) East Line system will be built entirely underground, the government announced yesterday in the press conference for the launch of public consultation on the project.
The LRT East Line aims to link the Pac On area in Taipa to the Border Gate. It will pass through Zone A of the new landfills and link to the Hong Kong-Zhuhai-Macau Bridge (HKZMB) Port, which will be an important part of the city’s major transport hub. This will connect the airport, the Taipa Ferry Terminal, and the HKZMB to the Border Gate.
During this year’s sectorial Policy Address, the Secretary for Transport and Public Works, Raimundo do Rosário, had hinted at the possibility of the line being built entirely underground, a solution that has now been confirmed.
Like Rosário, the chairman of the LRT company, Ho Cheong Kei, explained that this solution aims to maximize use of Zone A’s land resources in the new landfills. This will reduce the impact on traffic during construction, and allow operation of the line even during severe weather conditions such as typhoons.
The line will be 7.65 kilometers long with six stations and will include an underwater tunnel section, with 2.4 kilometers linking Zone E on the new landfills in Taipa to Zone A.
During the press conference where the government also announced the public consultation of the Urban Master Plan, Ho hinted that the project might cost around MOP2 billion. The estimated amount was based on the construction costs of a similar facility in the neighboring region of Hong Kong.
“We do not have an exact reference as we do not have any experience using this method in Macau,” Ho said, noting that for the construction of the tunnel the Tunnel Boring Method (TBM) will be used.
“In Hong Kong, some 16 kilometers of this type of underground excavation cost about MOP4 billion. While in Beijing, the same method used in the city subway system has reportedly cost around MOP1 billion per kilometer. I think our reality is closer to the Hong Kong one,” Ho said.
The official also said that construction of the East Line is likely to take at least five years and will begin when tunnel drilling starts. He added that the same trains that are currently operating on the Taipa line will also circulate on the new line.
Unlike the first LRT line, which officials admitted lacked planning and had several mistakes, Ho said that the government will take several factors into account for the East Line. The number of entries and exits from stations will be increased so that the facility can also operate as an easy and accessible pedestrian network in Zone A. Stations will also be equipped with other types of services, including shops and restaurants.
“[This time] we will take into account the commercial factors to boost the use and increase the Return on Investment,” Ho said. “We need to think about this in more detail regarding the quantity and functionality, as we do not want these shops and restaurants to cause any disturbance to the operation of the LRT.”