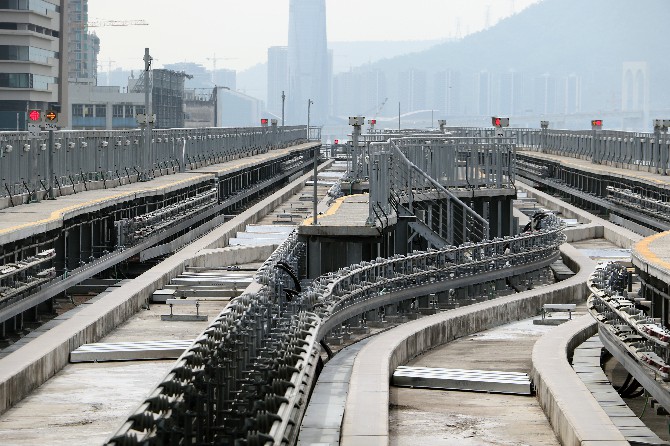 The Macau Light Rapid Transit (LRT) system is set to close from this Wednesday, October 20, for a period of six months for the replacement of all the high voltage cables used to supply the energy that powers the public transportation system, the Office of the Secretary for Transport and Public Works announced in a press conference held on Friday.
According to the information provided, the works included the replacement of all the 124 kilometers of high voltage cables that were found to be faulty and causing several service interruptions over the course of the less than two years that the Taipa line has been in operation.
During the press conference, the Office of the Secretary for Transport and Public Works Raimundo do Rosário said that the decision was made after a joint inspection conducted by the Infrastructure Development Office (GDI), the Macao Light Rapid Transit Corporation, the Mitsubishi Heavy Industries (supplier of the system), as well as a fourth entity which was not disclosed by the government.
After the inspection, it was concluded that the cause of the LRT system malfunctioning was due to “the overheating of the 22 kV high voltage cables used in the system,” the government said.
Such a problem might indicate several issues, such as that all the cables installed are either defective, substandard or that there was a design failure in the construction of the system in which the power needs of the system and/or the operating temperature of the cables were not taken into proper account.
Not developing into the topic, the Office of the Secretary noted that since the system is still within its warranty period, Mitsubishi Heavy Industries will assume the fault and replace all the cables of Taipa Line for free.
Due to the size of such a task and taking into account that it can only be performed at a time that the operation of the system is completely stopped, and the power is shut down, the government decided for the complete suspension of the operations of the LRT for an expected period of 180 days.
According to the officials, the government has considered proceeding with the replacement of the cable in a phased manner during the period where LRT operations are ceased. However, it was realized that this would create a window of just about three and half hours per day in which this work could be effectively done, as a result extending the replacement of the cable to a period of about two years.
On the other hand, government officials also claimed that it would be difficult to guarantee that, during this replacement period, there were no system breakdowns that would affect passengers.
Also considering the current Covid-19 pandemic situation and the little usage of the system, the government has opted for the full suspension.
During the suspension period, the LRT Company will post notices of the suspension of service at the stations as well as deploy personnel to assist uninformed travelers of alternative transports. All pedestrian overpasses at the stations will remain open to assist with the normal pedestrian traffic.

A troubled 22-month
operation
With a total bill reaching as much as 5.4 billion patacas, phase one of LRT has been involved in constant delays and mishaps, which includes several system glitches that left passengers stranded on several occasions.
The Taipa Line, which commenced a free-of-charge trial operation on December 10, 2019, saw this trial period extended for one month, until the end of January 2020, due to three glitches occurring in less than three weeks since the opening.
During the toll-free period, the LRT registered its highest average daily passenger number ever at 33,000 in the first month of operation in December 2019, followed by 16,000 in January 2020.
With the end of the free-trips period, the average daily passenger number plunged to 1,100 in February last year, dropping by a remarkable 14,900 from the previous month.
Ever since then, the average daily passenger number has hovered between 1,000 and 2,000.
The average number of daily passengers of the Taipa Line has reached a record high in July this year when the number of passengers transported totaled 2,600.
Although the figure represented a significant increase when compared to the 1,700 recorded in June and a rise of 36.8% year-on-year, such a figure is very far from the figures forecasted by the government.
The inefficiency of the system, over the almost two years, has led to constant criticism and accusations of overspending by many, including members of the Legislative Assembly, but also from different sectors of society.
The government, namely Secretary Rosário, has meanwhile been constantly defending the project, claiming that once the new lines being built (connecting the line to Seac Pai Van, Hengqin Line, and connecting to the Peninsula) are concluded, the potential of the LRT will grow exponentially, turning it into a de facto alternative to other forms of public transportation, namely buses.