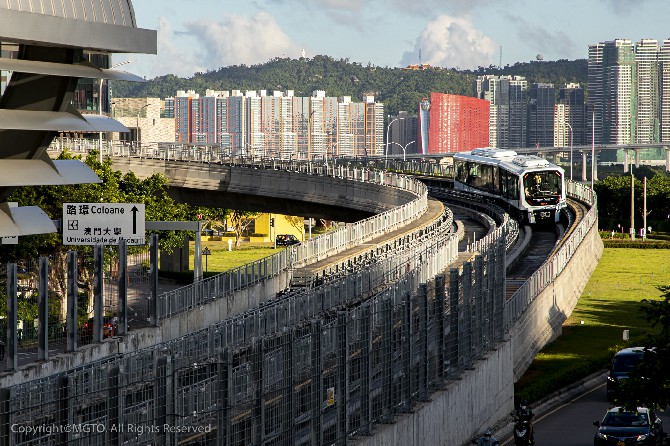 The Light Rapid Transit (LRT) system came under heavy fire from lawmakers at the Legislative Assembly (AL). In a plenary session dedicated to questions answered by the government on a range of topics, the focus on the present and future of public transport operations put the LRT system in the middle of much discussion.
Lawmakers Ella Lei and Agnes Lam were the first to raise questions over both the high expenditure and low efficiency of the LRT system, as well as its minimal contribution to the employment of local manpower.
Replying to the majority of questions was Secretary for Transport and Public Works, Raimundo do Rosário, who opened by saying that since the beginning of operations, the rate of local residents working for the LRT Company has been growing and has reached about 80%.
Rosário noted that when operations started, this percentage was only 60%, and he highlighted that the increase of 20% in such a short period is a very positive result.
“We are doing this step-by-step. We are following this path and reducing the number of non-resident workers (TNR), replacing them with local workers as much as possible. We already moved from 60% to 80% and will continue,” he pledged.
Another criticism raised by lawmaker inquiries was the lack of commercial elements in the LRT stations which could assist in reducing the net fiscal loss at which the operation currently runs.
On the topic, the Secretary clarified that the government has plans to include shops and other commercial spaces when the LRT East line is built to link the Pac On area in Taipa to Zone A of the new reclaimed land area and Border Gate.
“On East Line we are going to add more commercial elements, as this will be an area that will have a lot of people. So far, the LRT has not been profitable, we know this. In the past we did not have this idea of including more commercial elements. […] But now we are considering including an underground ‘commercial street’ with shops,” Raimundo confirmed.

No way to avoid losses
Although the government admits that it has changed its initial view on introducing commercial elements to the LRT to increase its overall revenue, it is not expected that the balance sheet will move out of the red anytime soon, the government warned.
Several lawmakers including Lam and Au Kam San called on the government to consider other ways to reduce the losses, such as reducing the frequency of LRT services, especially during the evening and off-peak hours.
In response, the Secretary recalled that it was known since the beginning of the project that the LRT system would be an expensive project and continuous investment in it would be required for many years, possibly even decades, as projected revenue over a significant initial period was low.
“To reduce frequency will not save a lot, so we hope to continue to operate in the same way and to try, instead, to attract [over time] more passengers to gradually use the system more instead of reducing the operations,” Rosário said.
Replying to a question from lawmaker Song Pek Kei on the possibility of forming partnerships with private companies to reduce the required high investment figure from the government, the Secretary added, “nobody wants to do that [invest in the LRT]. Private enterprises want to have profits. They only invest in things that have profit. At the moment, private companies do not even want to invest in vending machines for the stations. We did one public tender, just for one station to try and nobody wanted to join. To do this [reduce the loses] we need to link the lines to increase the number of passengers so the service can start to be profitable. This then can attract companies to invest.”
Rosário requested more patience from the public and lawmakers, saying, “I need to ask you to be patient. LRT is to provide an alternative to reduce road traffic and traffic jams. We need time. A couple of years ago everyone wanted the LRT but now you call it a ‘White Elephant.’ We need to be patient to see the results in the future. This is a long-term project and investment.”

Gov’t to take over
some duties by 2024
Confirmed in yesterday’s AL session was also the intention of the government to take over some of the operational duties of the LRT which are currently under a concession contract signed with Hong Kong’s Mass Transit Railway (MTR) company, due to expire in 2024.
Questioned on the topic, Rosário said, “After the contract from MTR is finished, there will be a part of the services’ operation that will be done by us. This I can assure you. We will not give it to a third party to manage anymore. This is the reason why we have been training local staff, to be able to perform these [duties] soon.”