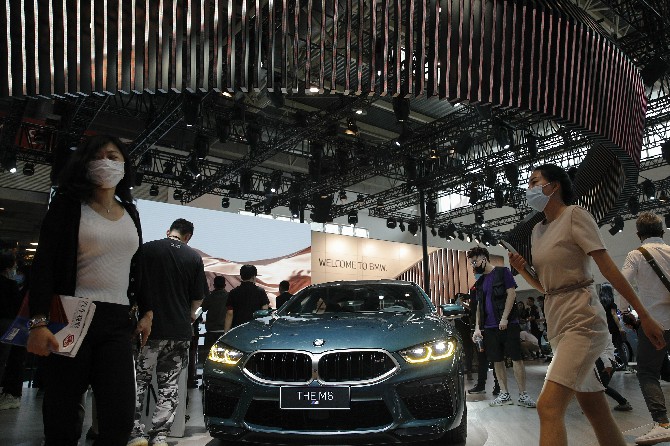 German automaker BMW said third-quarter net profit rose 17% to 1.81 billion euros ($2.22 billion) as sales boomed in China and highly profitable luxury models such as the 8 Series coupe and X7 large sport-utility vehicle helped fatten the bottom line.
The improved earnings report was darkened by a downbeat outlook that said future risks from the coronavirus spread were “high” and that “the pandemic is now clearly gaining momentum,” although the company stayed with its financial forecast.
The profit figure improved on the 1.55 billion euros recorded in the same July-September quarter a year earlier. Earnings bounced back from a loss of 212 million euros in the second quarter of this year, when the pandemic closed dealerships and factories.
The company said it benefited from regional upturns in demand as well as from strict cost and cash management. Chief Financial Officer Nicolas Peter said an earlier decision to focus on the upper luxury segment was paying off as more-profitable vehicles occupied a larger share of the company’s sale, citing the X7 made at the company’s plant in Spartanburg, South Carolina.
The company saw a strong performance from its BMW Brilliance Automotive Lt. joint venture in China, which was hit earliest by shutdowns related to the coronavirus but which has recovered faster. BMW sales in China, its largest market, rose 31% compared with a year earlier. Unit sales in Europe rose 7% while U.S. deliveries fell 16%. Revenues fell 1.4% to 26.28 billion euros.
Operating margins on sales came in at 9.4%, a key financial figure that shows how much the company is making per car. That was better than the 8.4% recorded a year earlier before the pandemic.
The company reduced both research and development spending and capital expenditure on plants and equipment during the quarter, but said spending on new technology remained at a high level, including for future electrified models. The auto industry is facing pressure from long-term change such as government regulation in Europe and China requiring more zero local emission electric cars to fight pollution and global warming, and from a move toward digital services.
Munich-based BMW said it planned to spend more than 30 billion euros on research and development by 2025.
BMW kept its earnings forecast for the full year, saying it assumes demand in key markets will be significantly reduced by the pandemic and that full-year profits will be “significantly lower” than in 2019 in light of the pandemic. It said the forecast excluded another severe worsening of the pandemic. The company said the level of risk from the pandemic “is assessed as high,” adding that “the pandemic is now clearly regaining momentum.” It said the company was “well prepared to act swiftly and decisively.”
BMW shares were down 1.8% in midday trading in Europe.  DAVID McHUGH, FRANKFURT, AP