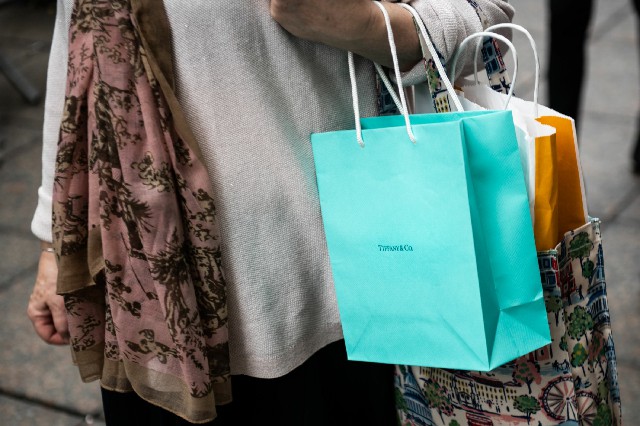 France’s richest man is adding the biggest jewel yet to his collection, as Bernard Arnault clinched a deal to buy Tiffany & Co. for $16.2 billion.
If history is any guide, the LVMH chairman will move quickly to apply his tried-and-tested formula for growth to the tarnished U.S. brand: simultaneously expanding its presence across the world, especially in promising Asian markets, while boosting exclusivity and prices.
It’s a difficult balance, but one that Arnault has been honing over three decades as he assembled a stable of luxury labels ranging from Louis Vuitton bags to Dom Perignon Champagne to Bulgari jewelry. While he’s had a few missteps, including purchases of Donna Karan and Marc Jacobs, LVMH has grown into the industry’s dominant player, with a market value of 205 billion euros ($226 billion). Arnault’s personal fortune has swelled to nearly half that amount.
“We will get our inspiration from our experience with Bulgari,” Arnault said in an interview. “We modernized and expanded their product lines. We reviewed their look. We reviewed communications.”
The 182-year-old U.S. jeweler, known for its robin’s egg blue boxes and a role in Truman Capote’s “Breakfast at Tiffany’s,” is a cultural icon in the U.S., but its reliance on that market and struggles of late have undermined its appeal. Tiffany’s operating margin of 17% is about half the level of LVMH rival Richemont’s jewelry business, which includes Cartier and Van Cleef & Arpels.
Arnault signaled he’s already looking at next steps for Tiffany, after sealing a deal over the weekend and announcing it yesterday morning. Since buying Bulgari, LVMH has moved the product line upmarket while emphasizing the brand’s Roman heritage and aesthetics. Marketing was focused on what Arnault described as emblematic pieces. Sales have doubled since the 2011 acquisition, with profits increasing fivefold, he said.
LVMH also made Bulgari a more credible player in watches and upgraded its store network with better flagship sites, said Luca Solca, an analyst at Sanford C. Bernstein. The company has a wealth of experience in brand communications and is better at social media than Tiffany, he said.
“Applying this marketing and communication machinery should go a long way in making Tiffany more relevant in design jewelry and watches,” he said.
LVMH should add more products in the key luxury price segment of $1,000 to $10,000, Solca said. Women’s watches are a big opportunity, he said, given that Tiffany has only a small presence in timepieces and the French company has plenty of experience in that business as the owner of TAG Heuer, Chaumet, Hublot and Zenith.
LVMH agreed to pay $135 a share for the U.S. jeweler, a 37% premium above the price before Bloomberg reported an initial approach in late October. The shares rose as much as 2% in morning trading in Paris, approaching a record. Tiffany climbed almost 6% to $132.80 in premarket trading in New York.
The purchase will add 500 million euros to 600 million euros to operating profit in the first year, and LVMH will finance it by issuing bonds as yields stand between 0% and 1%, Arnault said.
Tiffany remains highly dependent on the domestic market, with the U.S. accounting for about 41% of sales.
“Tiffany is an iconic, emblematic brand of America, with a great history,” Arnault said. “The weakness area is Europe – and that, we know what to do and how to address. And there is a great potential in China.”
The Tiffany deal is LVMH’s biggest ever and the first major acquisition since Bernard Arnault branched out by striking a deal for the Belmond hotel group last year. The French company’s 75 brands now span everything from fashion to suitcases to Cognac.
When asked what’s next on his list of acquisition targets, Arnault laughed and said, “One thing at a time.” MDT/Bloomberg