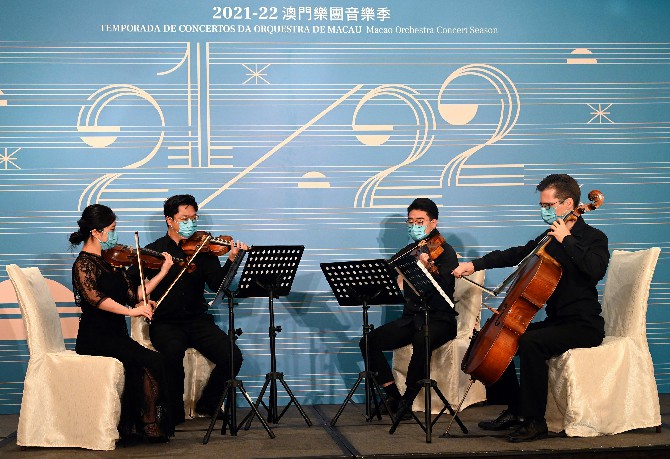 Macau will see a strong line-up of renowned musicians performing classical music at the Macao Orchestra 2021-22 Concert Season in September.
The Macao Orchestra season is organized by the Cultural Affairs Bureau (IC), bearing a theme of “Inheritance of German and Austrian Classics.”
The IC hosted a launching ceremony yesterday at the Mandarin Oriental Macau. It was attended by key authorities, leading musicians and executives across various industries.
2021 marks the 110th anniversary of the premiere of Austrian composer Mahler’s famous work Song of the Earth. As such, this edition of Macao Orchestra will collaborate with the Shanghai Philharmonic Orchestra to present the historical masterpiece, which has close ties with Chinese poems from the Tang dynasty, as it was conceived based on the poetry collection, The Chinese Flute.
The opening concert titled “2021-22 Season Opening Concert – Ning Feng meets Brahms,” which will see the Macao Orchestra and famed violinist Ning Feng co-presenting classical works by German master Johannes Brahms.
Other outstanding musicians featured in this edition include Song Yuanming, a well-known soprano; Zhang Jiemin, one of the most influential Chinese conductors; award-winning conductor Lin Daye and young pianist Zhang Haochen.
During the event period, Macao Orchestra will also work with MGM to co-perform the well-known early 20th century work, The Planets, by British composer Gustav Holst, at the MGM theatre.
To elevate the presentation, the concert will combine the world’s largest permanent indoor LED screen at the MGM Theatre with special lighting effects.
Tickets for the concerts will be on sale from 10 a.m. on July 31 at the Macau Ticketing Network.