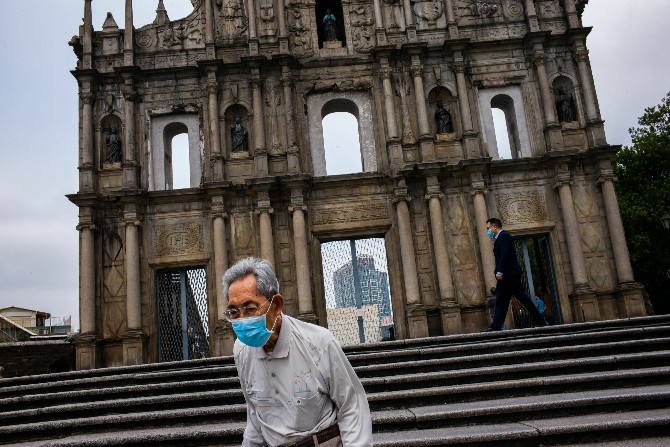 Macau casinos suffered their worst month ever as travel restrictions during the coronavirus pandemic left the world’s biggest gambling hub struggling with few players and a heavy daily burn of cash.
Gross gaming revenue plummeted 97% to 754 million patacas ($95 million) in April from a year earlier, according to data from the Gaming Inspection & Coordination Bureau. That’s the biggest drop on record, surpassing an 88% plunge in February.
Revenue for the first four months of the year is down 68.7%, held up only by a relatively strong January posting. Gaming revenue in January dropped 11.3% year-on-year to 22.1 billion patacas.
The situation for casino operators in Macau has continued to deteriorate even after they reopened their doors following a 15-day shutdown in February aimed at curbing the contagion. While operations have restarted, baccarat and roulette tables remain nearly empty, and casinos are each losing more than $1 million a day.
The outbreak has been largely contained in Macau as well as in neighboring Hong Kong and mainland China, but restrictions on travel make it almost impossible for tourists and high rollers to show up to place their bets.
Melco Resorts & Entertainment Ltd. this week highlighted the unprecedented damage the coronavirus is having on the $36 billion industry, culling its senior ranks while other executives take a pay cut. Chairman Lawrence Ho, who will forgo his salary for the remainder of this year, wrote in an internal memo that the number of customers since re-opening has been “virtually zero.”
Melco earlier this year pulled the plug on its plans to buy a stake in Crown Resorts Ltd., citing the impact of the coronavirus on Asian tourism. MGM Resorts International reported that its Macau unit’s first-quarter net revenue dropped 63% amid the “unprecedented crisis.”
Despite the damage to the industry, analysts expect travel limits to begin loosening beginning this month. Investors have also remained optimistic, with the Bloomberg Intelligence index of Macau operators rallying 21% last month after reaching a nearly four-year low in March.
Casinos are also likely to endure the daily drain of cash. JPMorgan Chase & Co. analyst DS Kim wrote in early April that all the casino operators “have ample liquidity to survive this unprecedented period of ‘near-zero revenue’ for over a year.” Galaxy Entertainment Group Ltd., with $6.8 billion in liquidity at the end of 2019, has enough cash to last more than six years, the analyst wrote.
The gaming results for April represent the seventh straight month of declining revenue, coming after Macau had already been battered by a two-year-long trade war and months of Hong Kong protests.
The SAR continues to endure near-zero levels in tourist arrivals as visitors from its number one source market are mostly prevented from traveling to the region due to the Central Government’s suspension of the individual visit scheme and Guangdong’s requirement that all arrivals, even its own residents, undergo a 14-day quarantine period.
According to data provided by the Public Security Police Force, which oversees immigration matters in the SAR, the number of tourist arrivals in March climbed above 200,000. That marked an improvement over the 156,000 visitor arrivals seen a month earlier, but remains far subdued from the more than 3 million tourists per month averaged last year.
During the Policy Address last month, Chief Executive Ho Iat Seng said his government will ask Beijing to resume issuing tourist visas to Macau, as well as increase the number of places that travelers can apply for individual visas. MDT/Bloomberg