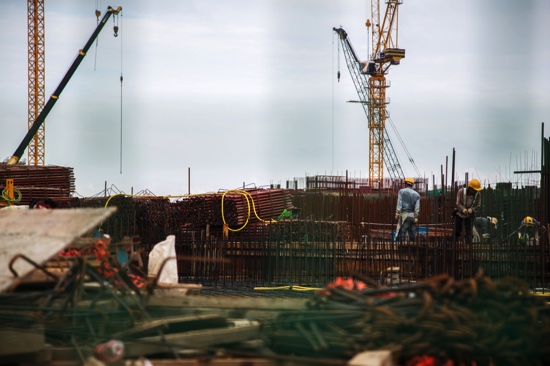 Workers labor as cranes operate at the Lisboa Palace construction site, developed by SJM in Macau

Macau is the second most expensive Asian city to build in after Hong Kong, while Singapore ranks third, says the latest International Construction Costs 2016 index published by Arcadis, a global design and consultancy firm for natural and built assets.
Globally, Macau is ranked fifth, behind Geneva (4), Hong Kong (3), London (2) and New York (1), according to the index which collates construction costs data from 44 major cities. According to the study, the MSAR is subject to less-than-
ideal market pressures which inflate costs in the construction sector.
Construction projects for casino and entertainment resorts, residential housing units, and land reclamation works are in high demand here, while a lack of space and available labor to satisfy this demand exerts upward pressures on costs.
In October information from the Statistics and Census Service indicated that the value of construction for the year of 2014 was up by 63.2 percent when compared with the previous year. The bureau accredited the rise to the construction of new hotel and entertainment facilities.
Meanwhile, Hong Kong saw its construction output reach a record high in 2014 largely due to government investment into the metro system and high speed rail services, which created a shortage of labor and drove labor costs higher.
An accompanying report to the index notes that while the construction sector remains strong, growth in construction costs across Asia have generally eased over the past 18 months.
“For Asia, China’s economic slowdown and weakening demand in many cities, including Singapore and Jakarta, mean that growth in the region is expected to ease as we enter 2016,” said the head of Southeast Asia Arcadis bureau, Alan Hearn.
Speaking in relation to Singapore, Hearn told the real estate website Property Guru that the construction market “enjoyed a strong recovery since 2010. It is for this reason that the recent slowdown in residential and commercial markets represents something of a correction.”
The report said that construction markets in many parts of Asia are likely to endure any economic turbulence from China in the coming years due to a shortage of affordable housing and infrastructure across the region.
But Arcadis warned that if long term construction costs continue to rise, Asian global cities could find themselves sidelined as developers shift their interest to lower-cost locations.
Ho Chi Minh City, Kuala Lumpur, Bangkok, Bangalore and Taipei are among the world’s cheapest cities for construction, added the report. Staff reporter