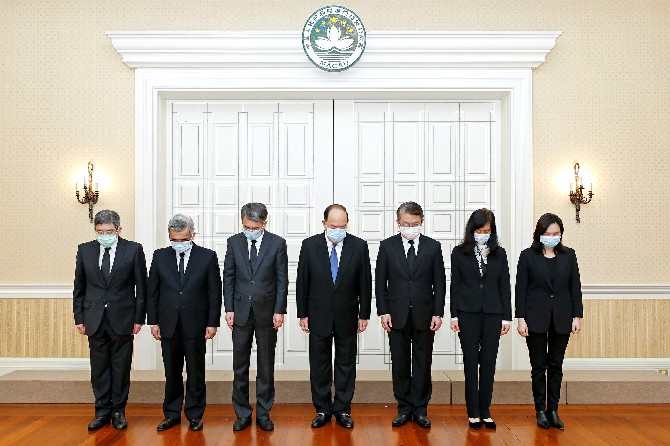 Macau joined the rest of the country on Saturday to observe three minutes of silence in commemoration of the victims of Covid-19. The city’s national and regional flags flew at half-mast at all public premises, and the government advised public recreational activities not to go ahead.
The commemoration, which was deemed by the central government in Beijing to be the National Mourning Day, also comes on the traditional Qingming festival, when Chinese people would normally visit the graves of their ancestors. Mainland officials have banned such observances this year to avoid large gatherings that might contribute to a feared second wave of infections.
On Saturday morning, at 10 a.m., the national government declared a nationwide moment of silence, encouraging people to pay tribute to the Covid-19 victims with three minutes of silence. This was especially for medical staff who succumbed to the disease as they carried out their duties.
During the moment of silence, Chief Executive Ho Iat Seng, led government officials to stand for the three-minute silence, in tribute to the Covid-19 victims in China, a note from the Government Information Bureau reads.
According to the mainland directive, the instruction was applied to all government buildings, buildings of legislative and judicial bodies, and at representative offices abroad. School premises and public facilities also took part in the vigil.
Offices of mainland authorities in Macau, namely the Liaison Office of the Central People’s Government in the SAR, the Foreign Ministry’s SAR office and the People’s Liberation Army’s SAR Camps also held a moment of silence to commemorate the victims. Flags at these offices were lowered to half-mast as part of the vigil.
Other non-government entities also joined, including the Macau Chamber of Commerce, the Neighborhood Association, the Women’s Federation, Kiang Wu Hospital and the Macao Federation of Trade Unions (FAOM).
The national and SAR flags flew at half-mast at the Chamber of Commerce’s headquarters located at Porto Exterior. Ma Iao Lai, president of the Chamber of Commerce, led the moment of silence vigil.
Besides, he also encouraged members of the public to remain vigilant and stay home as much as possible to help control the outbreak.
At the Women’s Federation, president Ho Teng Iat, together with lawmaker and deputy director-general Wong Kit Cheng and other management members, honored the moment of silence at the organization’s headquarters on Rau do Barca.
President Ho Sut Heng and Director-General Lei Chong Cheng of the FAOM, led the three-minute moment of silence at the Federation of Trade Unions headquarters. In the meantime, the vigil was also conducted at the Federation’s offices in Toi San, in Areia Preta, on Rua do Campo and in Taipa.
The public in Macau also observed the three-minute silence, “in order for the Macau community as a whole to express its condolences regarding those who lost their lives amid the Covid-19 pandemic,” according to the government.
Alongside the moment of silence, public recreational activities, and of any events intended to be of either a celebratory or festive nature scheduled on Saturday were due to be suspended as suggested in the State Council notice.
Though the moment was observed across the entire country, some media outlets reported it was particularly poignant in Wuhan, the central Chinese industrial city where the virus was first detected in December.