Macau should turn to data science to diversify economy: expert 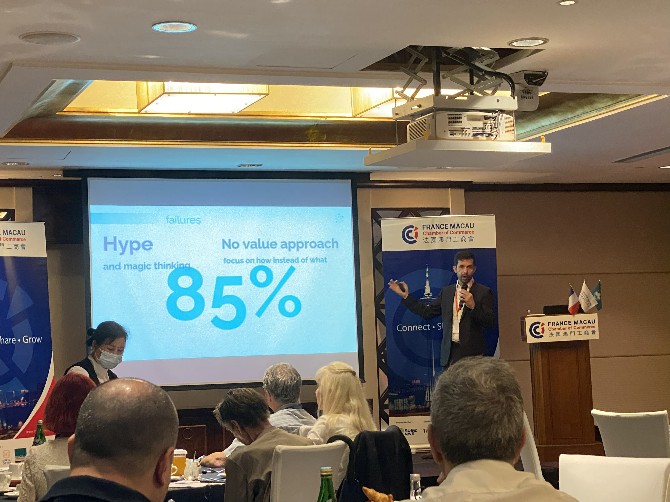 The fact that Macau’s economy is so heavily centered on its gaming business is part of the reason the city is “staying still” when it comes to innovation and digitalization, according to Xavier Mathieu, data scientist and chief executive officer of Modwise-Macau Consulting: a consultancy founded by him to help businesses gain quantitative skills.
Mathieu delivered his insights and observations at the breakfast gathering last week hosted by the France Macau Chamber of Commerce (FMCC).
He pointed out that Macau has several specific issues, including a low level of digitalization, little effort in innovation, low personal motivation, lack of talents and perspectives — which are several hurdles hindering the city’s adoption of data science.
A deficiency in economic diversification, or the over-reliance on the gaming industry, is the ultimate cause of several problems faced by the city.
According to the official data compiled by the Statistics and Census Service (DSEC), Macau in 2019 saw its gaming & junket sector contributing the largest share, or 50.9%, of its overall economy.
Mathieu regarded Macau’s gaming business as “an oligopoly on a 1.4-billion market [in China],” and thus have long been able to generate hefty and “guaranteed” profits readily.
Given the economic structure, some entrepreneurs and business operators tend to think that “optimizing the already very profitable business is not essential,” he stated.
Such a deep-rooted mentality has made most businesspeople go on an easier path and not seek digitalization and innovation through the use of data, said Mathieu, who had worked for BNP Paribas since 1997 and led data teams in Paris, Tokyo, and Hong Kong.
Besides, the fear of patron data being breached is one of the factors behind their reluctance to digitalize.
“Behind every business, there is data,” he said.
To strive for innovation, the data veteran suggests operators draw on data science which is conducive to helping them make better business decisions, optimize their products and services, be more innovative and scalable at the same time.
However, Mathieu warned local entrepreneurs not to fall into the common pitfalls of exploiting data science. Some of their counterparts, he observed, had embarked on data science projects without sufficient knowledge, and mistakenly conceived of data science as a money-making machine, and had eventually gone astray.