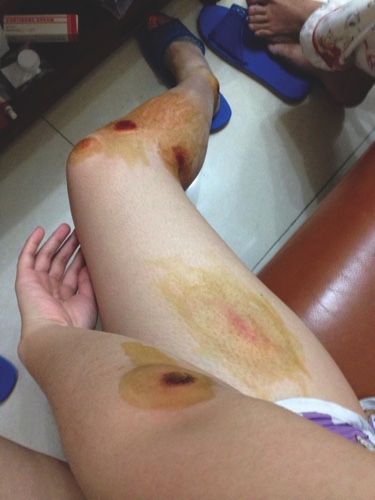 A picture of Ms Lin’s injuries

Details of a deplorable hit and run by a Macau taxi driver have surfaced on Macau Taxi Driver Shame, the official Facebook group of the Macau Taxi Passengers Association.
According to a post on a local Macau Facebook group made by the victim herself, Ms Lin Hongyan 林鴻燕, 23, a local Macau educator, was riding a motorcycle along Avenida da Amizade (Friendship Avenue) on the Macau peninsular around 7pm on Wednesday night when a taxi suddenly turned left, hitting Ms Lin on her right side and knock her to the ground. She was transported to a local Macau hospital for treatment of her injuries. The taxi driver did not stop.
“As luck would have it, Mr Gonçalo Lobo Pinheiro, a local Macau-based member of the Macau Taxi Driver Shame website witnessed the entire incident and rendered assistance to the victim,” the association said in a press release early morning today. The victim and witness were connected again yesterday using social media on both Macau Taxi Driver Shame and 澳門道路情報 (Macau Road Information), a Chinese language Facebook group commentating on traffic related intelligence in Macau. On Macau Taxi Driver Shame Mr Pinheiro posted “Taxi with plate MN-21-55 rammed a biker in Avenida da Amizade and run away!!!” while members of both Facebook groups deplored the actions of the taxi driver and encouraged the victim to report the incident to the police.
The president of the Macau Taxi Passengers Association, Andrew W Scott, said, “This is yet another awful act by a Macau taxi driver. These are meant to be professional drivers charged with the responsibility of safely transporting members of the public from point A to point B. Instead of exercising a duty of care and assisting the victim, this driver simply ran from the scene! It was, however, wonderful to see the power of social media and how concerned Macau locals worked together connecting the local victim and the member of Macau Taxi Driver Shame who witnessed the incident. I wish the Ms Lin a speedy recovery and I certainly hope the taxi driver is prosecuted to the full extent of the law.”
Several incidents involving black taxis have been heavily reported on the association’s page.