Macau-Zhuhai travel likely to resume if no new cases: CE 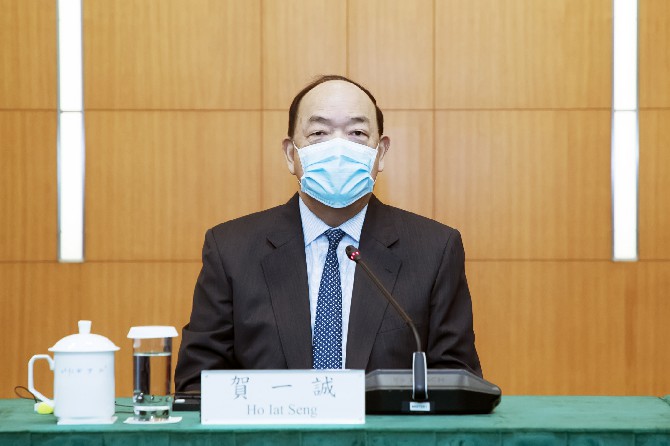 Chief Executive Ho Iat Seng has said that if no new Covid-19 cases are detected today, the quarantine-upon-arrival measures for entrants to Zhuhai from Macau will likely be lifted.
He made the announcement at a special press conference yesterday as he returned to Macau late Tuesday from an official visit to mainland China.
The official purposes of Ho’s trip were to attend ceremonies of the National Games in Shaanxi province and visit Sichuan province for Macao Week: a campaign to promote Macau tourism.
Ho mentioned yesterday that, after these two stops, he went to Beijing for meetings with national officials before heading back home Tuesday night.
As soon as he returned home, he spoke with officials in Zhuhai via video-conference to discuss border restrictions.
Consensus was reached that the current border restrictions will remain in effect until at least the end of this month, which is today.
Currently, those entering Zhuhai from Macau are required to present a negative PCR test result issued within 24 hours and will be quarantined centrally upon arrival.
Yesterday, Ho explained that in the best-case scenario, if there are no new cases detected yesterday and today, border controls are likely to return to normal settings.
The border restrictions this time are tighter than previous restrictions. In August, when the city detected infections in a family of four, Zhuhai authorities shortened the validity period for PCR tests for border crossing to 24 hours but did not impose a requirement to quarantine on arrival.
Ho explained that authorities in Zhuhai are more vigilant this time because the city is currently hosting the International Air Show. “Zhuhai authorities don’t want any problems to [negatively] impact the Air Show,” Ho said.
When questioned by the press on whether a return to the “normal state” of border restrictions refers to 48-hour or seven-day PCR test result validity, Ho explained that he meant the lifting of the requirement to quarantine on arrival.
“However long the PCR validity is, at least we can resume normal border crossings [without quarantine],” he said.
The CE admitted that even if restrictions are lifted, it will not provide a stimulus in time for the October 1 Golden Week, but added that it will be helpful to commuters who cross the border for work.
With regards to border normalization between Macau and Hong Kong, Ho confirmed that while the local government eagerly anticipates the resumption of normal interactions between the two Special Administrative Regions (SARs), such adjustments need to conform to national standards. This statement aligns with earlier comments made by public health doctor Leong Iek Hou, coordinator at the Center for Disease Control and Prevention.
The local government has reiterated that Macau’s border health restriction measures must align with national standards, hinting that unless mainland China waives the quarantine-upon-arrival requirement for entrants from Hong Kong, Macau will retain its own tight controls on entrants from the neighboring SAR.
However, Ho hinted that Guangdong and Hong Kong are in negotiations on the relaxation of border health restrictions, and he therefore hopes there will be good news soon. When these relaxed measures come to fruition, Macau will be able to resume normal interactions with Hong Kong.

Late introduction of vaccination holidays
Although he wants more members of the public to take the Covid-19 vaccine, Ho reiterated that vaccination should be voluntary.
He was questioned on whether the local government will follow the lead of its counterpart in Hong Kong by offering one-day vaccination holidays to its civil servants.
Ho said that this must be considered in a wider sense. “If we implement this measure, should we offer an extra day of holiday to our colleagues who have taken the vaccine?” he questioned. He sees this as a moral debate.
Giving an extra day of leave to the 38,000 or so civil servants is not a big concern for the government, Ho explained, but it will impact the rest of the SAR’s approximately 200,000 workers.
In addition, he said, reviewing those who have taken the vaccine before the implementation of the proposed policy would incur a great administrative cost.
Finally, he added that it would send a harmful message to the public that if they are willing to wait, they will receive greater benefits.

‘Iconic’ GP will go ahead this year

The annual Macau Grand Prix will be held as usual this year, the CE confirmed, because it is a well-received and iconic major event both culturally and economically in Macau.
He noted that despite the challenges last year, the event was able to proceed, hinting that this year it would be less challenging.
The CE fears that if the event is suspended this year, its image in the international arena will be damaged.