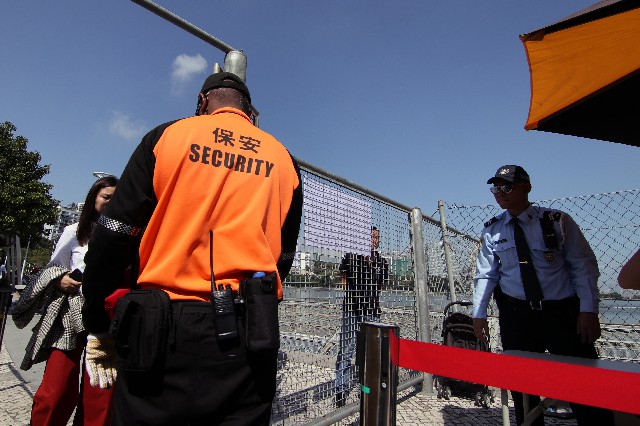 The 66th Macau Grand Prix (GP) held over the weekend faced unprecedented security measures, from security inspections on media representatives to thorough checks on competitors’ vehicles and on the general public. In common, all these inspections seek the forbidden word – Hong Kong.
Although the inspection of spectators’ bags has been a common measure at virtually any event, including the GP, this year’s edition had more inspections than usual. Long lines of people waiting to be able to access the stands were seen at every entrance of the public stands and the same was the case in the walkway area in between stands.
For the first time, these inspections were conducted on all media representatives and even to the “Press on Course” which need, in the fulfillment of their duties, to often be in and out of several allowed locations in the circuit.
Besides the common accreditation badge checking, all backpacks and any other forms of luggage were thoroughly inspected by the security staff, under the supervision of a Public Security Police Force (PSP) officer.
The reason for such strict measures was later unveiled by the Times report as two spectators wearing green t-shirts sponsored by a famous beer brand were suddenly and abruptly stopped by a security guard who told them they should immediately take off the garments.
Why? Because on the t-shirts was written the message: “Let’s go Hong Kong.”
The Times reporter recognized that the t-shirts were part of promotional material from the neighboring region’s popular rugby event, Hong Kong Sevens.
Questioned by the Times, another security guard working on site confirmed that, “there were instructions to not allow in HK-related messages.” He added that if people had any item with such messages, they would be asked to remove it or (in case that was not possible) flip it inside-out.
Later that day, the Times also questioned one of the GP organizing committee staff members about this issue. The staff member claimed to not be aware of the security measures enforced for spectators and media but remarked that there were “instructions for a very careful checking of the advertising on the vehicles racing on the GP.”
Although noting that such work is carried out every year on a regular basis in order to spot “advertising of unlawful products or services,” this year, she said, the HK topic had been also mentioned, particularly in what concerned the “cars of Macau and Hong Kong racers.” But “nothing was found.”
On Thursday, the HK media outlet Apple Daily also reported that for the first time since the handover, three reporters from the media outlet were barred from entering Macau to cover the GP event.
In the report, the media outlet said that three of their staff members had been stopped by the Macau authorities on arrival in the Outer Harbour Ferry Terminal and after questioning, were sent back to HK under the allegations that they would pose “a threat to the Macau SAR stability.”
The three staff members were identified as two journalists from the Sports team and one photojournalist.
During the questioning by the local authorities, the reporters said they had provided confirmation letters of their accreditation for the coverage of the event, as well as the reservation proof of the hotel rooms where they would be staying.
After being questioned for about two hours, the three reporters were denied entry based on Number 4, Paragraph 1 of Article 17 of the Macau SAR Internal Security Law.
The media outlet noted that although other colleagues had been previously barred from entering Macau, this was the first time that such an incidence occurred with these three people in particular. 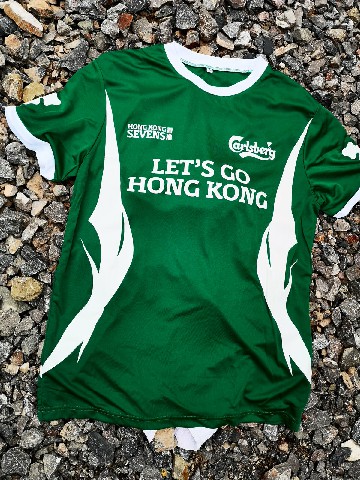 Hotel bookings cancellations
The Times also learned that not only journalists were barred from entering Macau over the Grand Prix weekend.
According to a hospitality source in Cotai, a hotel property received an abnormal quantity of requests last week for last-minute cancellations of rooms previously reserved by people aiming to attend the Grand Prix event.
Most of those requests, accounting for around 25% of the total number of rooms were Hong Kong residents who said that they had faced several difficulties and barriers placed by the HK authorities preventing travel to Macau.
The tourists reported being denied visiting the Macau SAR by HK authorities at the immigration checkpoint where they waited several hours to be questioned and inspected.
According to reports from those involved, almost everyone was directed to a room to be interviewed after being stopped at the checkpoint while trying to leave HK.
In the interview, people were asked about the purpose of visiting Macau, asked to show how much cash they were carrying, and had their mobile phones and social media accounts inspected by the immigration officers.
The Times also inquired about other hotel units in Macau, and although they discovered a lower occupancy in comparison with previous years, many people to whom the Times spoke refused to comment on the number of last-minute cancellations, or on reasons given by their guests.
Questioned on the possible relationship between the cancellations and the current social unrest in HK, at least one source noted that according to internal information of the hotel group, “we know that HK and Macau share Intel. So if they [the people] have been outspoken about the “free HK” movement or they have been [involved in activities] related to the unrest, they better not even think of coming to Macau. They’ll be wasting their time.”
The same person also noted, “I always hear [from people in high places] that our government is really scared that the situation in HK might spillover.”
Acknowledging that they were aware of a significant number of cancellations within the hotel group he said, “We have many booking cancellations from abroad too [not just from HK] because most travelers to Macau always aim two-city trips, and if they can’t go to HK, then they’d rather not travel at all.”