Maduro era is endurance test as Venezuela’s lifelines fall away 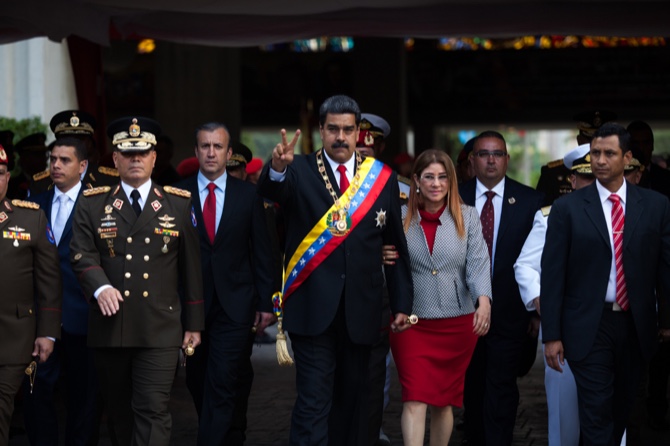 President Nicolas Maduro’s second term is officially six years. However, it will endure only as long as Venezuela’s moribund economy allows.

The 56-year-old successor to the late Hugo Chavez has withstood the most obvious threats as he took the oath of office yesterday. He has weathered protests, impeachment drives, an assassination attempt and U.S. sanctions. He’s trampled the rules of markets and international norms and faces isolation after an election last year that more than 60 nations refuse to recognize. But as Venezuela’s economic lifelines drop away, his survival now depends on the country’s stamina.

In his next term, Maduro must manage to feed a hungry nation, kick-start production at state oil company Petroleos de Venezuela SA and fend off creditors threatening to snatch up assets abroad. He has deepened ties with authoritarian allies such as Russia, China and Turkey, but they have provided only limited support.

Maduro shows no sign of hesitation: “Rain, thunder or lightning,” he said this week. “Venezuela will stay on its course.”

Calls are growing within the ruling socialist party to dissolve the opposition-led congress, the only elected institution Maduro doesn’t control, and one that has already been defanged. On Tuesday, the politically omnipotent National Constituent Assembly passed a measure that could be the first step to enable its disappearance. The super-body convened by the president also threatened treason investigations against dissident lawmakers.

Since Maduro was elected in 2013 after Chavez died, the country has been brought low by mismanagement, corruption and the oil industry’s collapse. In 2018, exports of crude, which once made the nation South America’s wealthiest, plummeted to a three-decade low of 1.25 million barrels a day. That’s ravaged a population that now grapples with Soviet-style shortages, soaring prices and malnutrition.

“Last year was catastrophic, the worst I can remember,” said Betty Diaz, who runs a soup kitchen in Petare, a hillside slum in eastern Caracas. Diaz feeds 130 children daily, but began turning teenagers away in favor of the youngest and most desperate. “For many of the children, the only meal a day they eat comes from us, but it’s harder and harder for us to provide; every day it’s more expensive.”

Rolling blackouts and crumbling public services are endemic in countryside and capital alike. In Caracas, residents line up at mountainside springs to fill jugs and bathe children, while the hungry pick through garbage bins. Any plastic trash bag left on the street is methodically slit and sorted.

People are fleeing as they face both hunger and hyperinflation, which according to Bloomberg’s Cafe Con Leche Index stands at almost 225,000 percent. Some 3 million Venezuelans now live abroad, and thousands more leave every day. The exodus has overwhelmed Venezuela’s neighbors, but regional leaders have been unable to coordinate a response that would make Maduro change course – and the outflow lowers pressure for change.

Last week, Colombian President Ivan Duque stood alongside U.S. Secretary of State Mike Pompeo and called on governments to “unite to reject the dictatorship of Venezuela and make all the necessary efforts to restore democracy.” Twelve Latin American nations plus Canada – the so-called Lima Group – urged Maduro last week to hand over power to the opposition-led National Assembly and call fresh elections.

Constituent Assembly President Diosdado Cabello said Tuesday that lawmakers in the threatened national legislature who support the idea should be punished.

“Those who are now in the National Assembly are traitors. Several lawmakers turned their backs on the most sacred: respect for sovereignty,” he said.

Increasingly, however, it’s the Chavistas against the world. Already the U.S. Treasury Department has sanctioned Maduro and dozens of his confidants – including Cabello. Just Tuesday, it punished a media executive whom the agency accused of running a corruption network that robbed the nation of more than USD2.4 billion. Now the U.S. is even considering designating Venezuela itself as a state sponsor of terrorism.

Throughout it all, America has remained the primary buyer of Venezuelan crude. But financial sanctions imposed by the Trump administration have prevented the country from raising cash to revitalize the state oil company, known as PDVSA. Maduro has relied on China and Russia for loans, credit and joint ventures to keep the crude flowing, but economists say it’s far from enough to stop the slide in production.

“To boost oil production, investment is needed, but there are no conditions for new loans to PDVSA or massive investments,” said Henkel Garcia director of the Caracas consultancy Econometrica.

Not only is Venezuela tapped out of capital markets, but creditors are closing in. Debt investors have begun to band together to demand more than $9 billion in overdue bond payments. The urgency increased after Houston- based ConocoPhillips and Canadian gold miner Crystallex International Corp. managed to wring $1 billion out of the government by threatening to lay claim to Venezuela’s assets abroad.

It’s a dramatic turn of events for investors, who reaped decades of huge returns investing in Venezuelan debt before the socialist government finally ran out of money.

Gregory Weeks, a professor of political science at the University of North Carolina at Charlotte, said that if the U.S. truly wants to isolate Venezuela, it would have to stop buying its oil.

“You can say you’re not going to recognize him, but if you’re still trading and buying Venezuela oil, how much does it really matter?” Weeks said.

So how much longer can Maduro and Venezuela last in this limbo? Weeks pointed to Zimbabwe under strongman Robert Mugabe, who was president from 1987 to 2017.

Wracked by hyperinflation and a shrinking economy, his regime “limped on and on, while the military was kept complacent until they finally decided to act,” Weeks said. In Venezuela, “I don’t see a reason why things couldn’t play out in a similar fashion.”Alex Vasquez, Andrew Rosati,  Bloomberg