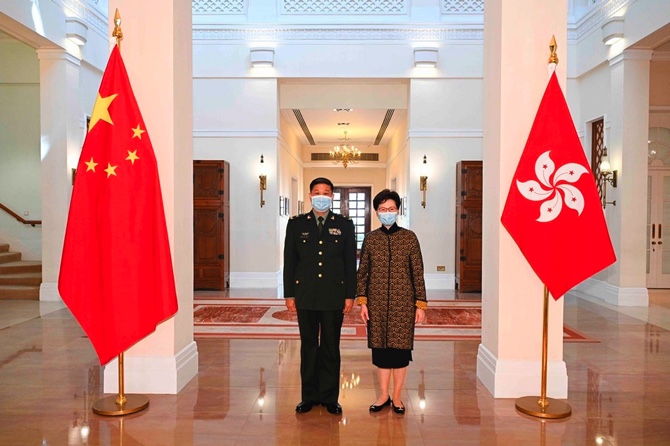 China’s military says the former head of internal security in the Xinjiang region will lead the People’s Liberation Army’s garrison in Hong Kong, in the latest of a series of moves aimed at bringing the semiautonomous city under Beijing’s tight control.

Peng met Monday morning with Hong Kong’s Chief Executive Carrie Lam, who told him her government would work with the garrison to “jointly safeguard the sovereignty, security and development interests of the nation and help maintain the long-term prosperity and stability of Hong Kong,” according to a government news release.

The move follows China’s stamping out of political opposition and curtailing free speech in the city, a former British colony that was promised it would keep its civil liberties and independent legal system intact for 50 years following the handover to Chinese control in 1997.

China imposed a sweeping National Security Law on Hong Kong following anti-government protests in 2019, resulting in the imprisonment, intimidation and exile of most opposition voices. Independent media outlets have been raided and forced into closure through seizure of assets or threats of prosecution.

Candidates considered insufficiently loyal to Beijing were barred from running in elections for the local Legislative Council.

From 2018, Peng commanded the paramilitary People’s Armed Police force in Xinjiang, where China has detained hundreds of thousands of Uyghurs and other members of Muslim minority groups in political reeducation camps. The vast region remains enveloped in a security blanket that controls most aspects of the lives of its Muslim residents.

The U.S. and others have labeled the campaign as genocide, while China says all participants in what it describes as a push for job training and de-radicalization have now graduated. MDT/AP