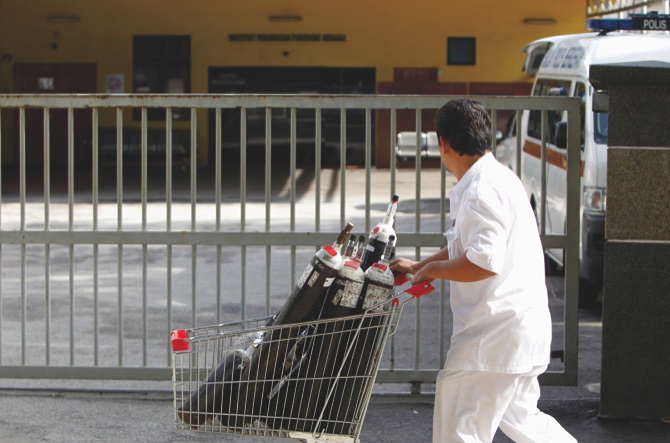 Malaysia’s health minister said yesterday the body of Kim Jong Nam is still in Malaysia, six weeks after the exiled half brother of North Korea’s leader was poisoned in Kuala Lumpur.

Health Minister Subramaniam Sathasivam made the announcement as rumors swirled that Kim’s body was about to flown out of the country as part of diplomatic negotiations. Custody of the body has been a flashpoint in the case as relations between Malaysia and North Korea deteriorated sharply.

Kim was poisoned on Feb. 13 at a crowded airport terminal in Kuala Lumpur. According to Malaysian investigators, two young women went up to Kim as he waited for a flight and smeared VX nerve agent — a banned chemical weapon — across his face. He was dead within 20 minutes.

Although Malaysia has never directly accused North Korea of being behind the attack, many speculate that it must have orchestrated it.

North Korea has denied any role in the killing and denounced the investigation as flawed and politically motivated. North Korea does not even acknowledge the victim is Kim Jong Nam, referring to him instead as Kim Chol, the name on the passport he was carrying when he died.

North Korea has demanded custody of the body because the victim was one of its citizens. But Malaysia refused, in part because it needed to formally identify the body, which it now says it has done, using DNA from his son.

Conflicting reports in the local media on Monday said Kim’s body was to be cremated and flown to North Korea, or that the body was about to be sent to Macau, where his family is believed to be.

But Health Minister Subramaniam Sathasivam said the body is still at the morgue. “As far as we are concerned, there has been no change,” he said.

“Once they finish the discussion and come to a definite decision, we will make an announcement,” he said, in reference to negotiations between the two countries.

Relations between Malaysia and North Korea have frayed since Kim’s death, with each expelling the other’s ambassador. North Korea then blocked Malaysians from leaving the country until a “fair settlement” of the case is reached. Malaysia responded in kind, barring North Koreans from exiting its soil.

The two women accused of wiping Kim’s face with the poison have been charged with murder. The two — an Indonesian and a Vietnamese — say they were duped into thinking they were taking part in a hidden-camera prank TV show. Authorities also say they are looking for seven North Koreans. Four of them left Malaysia on the day of the killing and are likely back in North Korea. Police said the other three men are believed to be hiding in the North Korean Embassy in Kuala Lumpur. Eileen Ng, Kuala Lumpur, AP