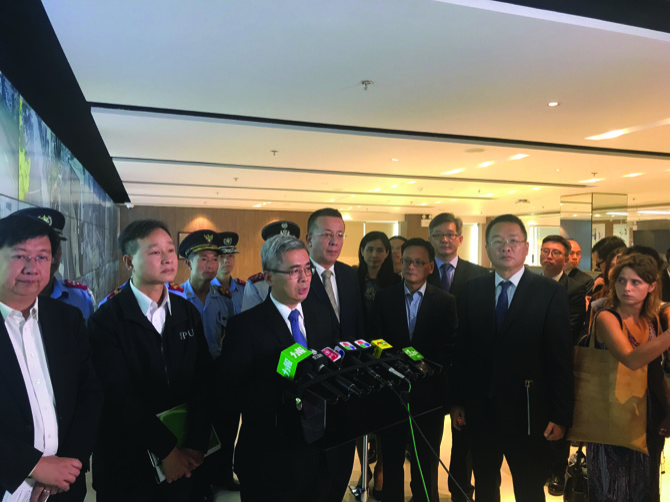 The Social Affairs Bureau (IAS) has already made plans to improve operations in the city’s shelters, Secretary for Security Wong Sio Chak announced yesterday, after meeting with Chief Executive Chui Sai On at the Civil Protection Action Center.
In particular, the IAS is not satisfied with the distribution of shelters due to the unbalanced number of evacuees at each shelter during the typhoon.

According to Wong, while some shelters received a large number of evacuees, others did not.

The transfer of evacuees from one shelter to another has also received feedback that it could have been handled better.

The IAS revealed that, during the typhoon, the shelters received many non-Chinese nationals.

“The language skills of the reception staff [should] improve,” said Wong, who went on to explain that in addition to the large number of non-Chinese speakers, the shelters also received many mainland tourists.

“Language skills posed a challenge to IAS’s work,” said Wong.
The Secretary further noted that the IAS already has a plan for improvement, and that the government will focus more on promotional campaigns.

In the opinion of the city’s top security official, the IAS did a good job despite it being the first time such an operation had been carried out.

The government conducts promotional campaigns for disaster prevention in three languages: Chinese, English and Portuguese.
According to Wong, some members of the public, including tourists, do not pay attention to these campaigns because they believe that disaster prevention is not relevant to them.
Wong reminds these people to pay more attention to the information provided by the government.

Wong noted that the IAS director already pointed out that improvements will be made.

In addition to language skills, the IAS has also identified another problem affecting shelters. It was difficult for the shelter staff to rest during the typhoon, a situation that needs to be remedied.

Wong also reported other improvements being considered by the government. In terms of rescue, evacuation and shelters, the security authority concluded that it will need to enhance evacuation skills and educational campaigns. As previously mentioned by Wong on Monday, some residents were unwilling to be rescued.

Yesterday, Wong pointed out that the security force hopes it will be able to invest additional efforts in educational campaigns regarding evacuations.

To handle flooding situations, the security force, in particular the customs authority, will purchase more inflatable boats and watercrafts.

During the typhoon, CEM deliberately cut off the electricity power supply in some areas. The government hopes that these decisions can be relayed to the government in advance in future.

Wong noted that majority of people who remained in the streets during the typhoon were tourists. The government will also release educational campaigns to raise awareness of the need to seek shelter in emergency situations. JZ