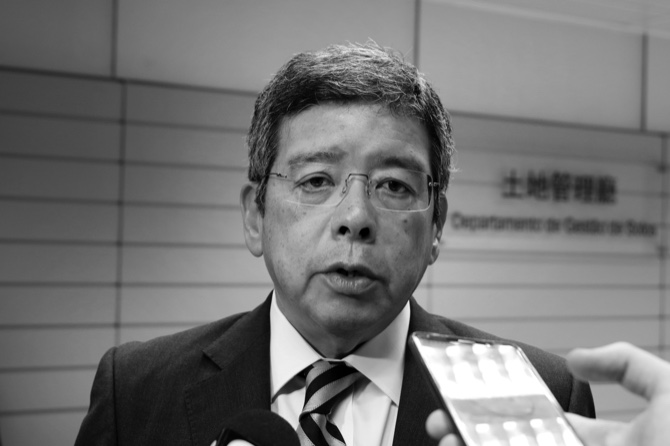 Secretary for Transport and Public Works Raimundo do Rosario said yesterday that he was satisfied with how Macau’s infrastructure had resisted typhoon Mangkhut last weekend, adding that mitigating the effects of flooding in low-lying parts of the city was a considerable problem and might never be solved completely.

Speaking on the sidelines of a meeting of the Urban Renewal Council yesterday afternoon, Secretary Rosario admitted that typhoon-induced flooding in certain parts of the city, including the Inner Habor and Ilha Verde areas, would be unavoidable in the short term.

That’s because these areas cannot be elevated to a height that would protect them from the accumulation of seawater during typhoons.

But in the long term, Rosario suggested that projects such as a water pump under the management of the Civic and Municipal Affairs Bureau or the tidal gate barrier proposed for the Inner Harbor, might prevent flooding altogether.

Regarding the response last weekend of the bureaus under his command, Rosario said that aside from minor electricity supply issues for a small portion of the population, the city’s infrastructure had held out well. Given the intensity of typhoon Mangkhut, he said, the performance was on the whole satisfactory.

“Human works are never perfect and there is room for improvement,” said Rosario, but even the most notable problem to come out of Mangkhut, the severed electricity supply, ”was not so bad.”

Specifically, Rosario compared the 90 electricity units that this year require repairs to the more than 200 following typhoon Hato in 2017.

He also said that he supported the decision of public electricity company CEM to temporarily suspend the power supply to certain parts of the city to avoid their long-term damage.

In the Secretary’s opinion, there is little that can be done in the short-term to prevent electricity supply interruption to low-lying parts of the city, because flooding will inevitably occur until larger public works are constructed. DB