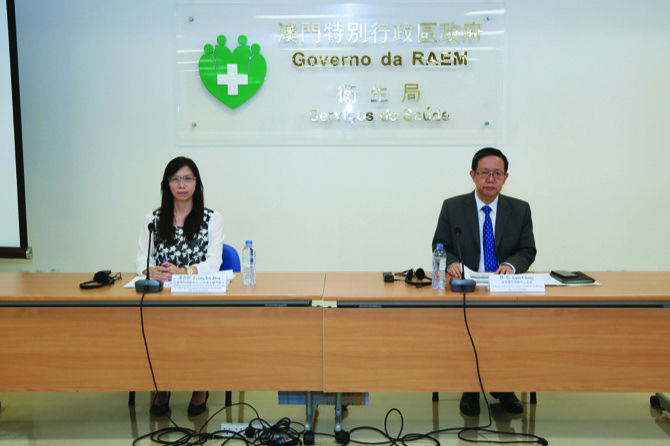 The director of the Health Bureau’s (SSM) Disease Prevention and Control Centre, Lam Chong, has urged employers of non-resident workers (TNR), especially those from the Philippines and Vietnam, and those employed in childcare, to vaccinate them against measles wherever their vaccination history is unclear or incomplete.

Lam was speaking at a press conference held by the SSM on Wednesday evening to provide updates on recently reported cases of measles in the region, adding that TNRs should preferably get vaccinated against measles at private hospitals and clinics, but that they can also go to healthcare centers where the vaccine costs less than MOP100. In the latter case, the TNR will need to bring their identification document (blue card), in addition to their Health Bureau user card, which can be obtained at the same place before the vaccination, and a document proving their working contract.

According to the official, despite the fact that Macau was certified as having achieved the eradication of measles in 2014, and was one of the first four countries and regions in the Western Pacific region to do so, the disease is active in Macau. With several reports of outbreaks in neighboring regions, the occurrence of imported cases in Macau is likely, Lam said.
In a review of the occurrence of cases during the first three months of 2019, the official noted that, so far, “eight cases of measles have been registered in Macau, with five of those considered imported cases and the other three cases of contamination in relation to the imported ones.”

When reporting on the most recent cases, public health physician Leong Iek Hou revealed one case involving a physician working at Kiang Wu Hospital who had recently treated a measles patient and then contracted the disease from the patient. Another was revealed to be a TNR from Nepal who works at the Macau Jockey Club, while two other suspected cases of measles are awaiting confirmation.

The year-to-date figures worryingly already represent a near three-fold increase in measles cases, compared to the entire year of 2018 which registered only three cases, all imported.

The director of the Disease Prevention and Control Centre emphasized that measles is a highly contagious disease, with most cases affecting children in areas with low vaccination rates, though generally the consequences are not serious.
Nonetheless, he noted that in some cases, especially when contracted by adults, measles can cause several complications that include encephalitis and pneumonia, with a mortality rate between 1 in 100 and 1 in 1,000 cases.