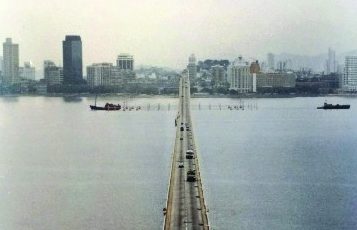 Governor Nobre de Carvalho Bridge is a dual-lane two-way bridge connecting the Macau Peninsula around Ferreira do Amaral Square to the island of Taipa at the northern slope of Taipa Pequena (Small Taipa Hill).
It was the first link built between the peninsula and Taipa, and local Chinese speakers call it the “Old Bridge.”
Construction of the bridge started in June 1970 and it was finally opened to traffic in October 1974.
The bridge has a particular architectural shape, where the first third of the bridge is elevated in a triangular shape, allowing boats to pass through.
Its full shape resembles the one of a dragon, where Casino Lisboa represents the dragon’s head and Taipa Monument on Taipa Pequena represents the dragon’s tail.
The bridge is named after José Manuel de Sousa e Faria Nobre de Carvalho, who was the Governor of Macau between November 1966 and November 1974. RM 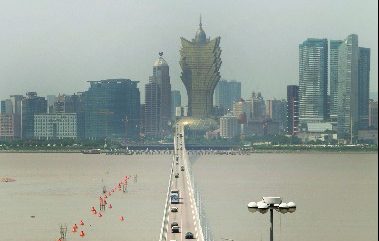