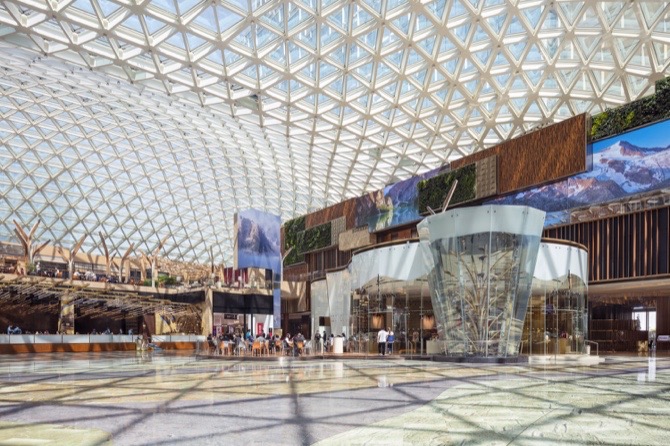 MGM China has been awarded a Guinness World Record for the Spectacle at its Cotai property, after its free- span self-supporting grid shell- glazed roof was recognized as the largest structure of its kind. The record was approved on January 19, according to MGM, although the certificate was only received this week.

Dubbed by the casino operator as a dynamic blend of nature and cutting-edge technology, the Spectacle is a 360-degree digital canvas home to more than 100,000 plants, an array of dining experiences and 25 LED screens in varying sizes that cycle through a digital art collection.

Its centerpiece is the 138.5-meter tall Spectacle roof which, covering more than 8,000 square meters or the playing area of about 30 tennis courts, consists of a free-forming triangulated steel grid shell supported only along its perimeter. It cost over USD37 million to build, according to MGM.

MGM challenged Kohn Pedersen Fox Associates, who collaborated with Arup, to conceive the structural concept and geometry of this expansive glass canopy. Engineered by Siu Yin Wai & Associates Limited (Hong Kong), the diagrid structure spans over the podium space with a clear longitudinal spanning up to 138.5 meters, without being supported by any internal columns. Consisting of 4,365 beams and 1,531 beam nodes, the roof structure weighs approximately 2,000 tonnes.

Siu Yin Wai & Associates Limited (Hong Kong), the same engineer for the Grande Praça in MGM Macau, helped to apply for the Guinness World Record after the construction was completed.

Arup generated the 3D geometry of the steel diagrid shell using dynamic relaxation software and utilized an iterative sizing algorithm to minimize the weight of components but ensure their resilience to typhoon winds.

The gaming operator boasts that the efficient structural shell helps to maximize the volume of space within the podium area, while minimizing the obstruction of views to the exteriors.

The structure allows for natural light to penetrate the resort. Being able to respond to different times of the day creates a microsystem of the Spectacle that resembles an outdoor experience – minus the spring rain and humidity.

MGM informed the Times that it is currently working with Guinness World Records to install a plaque in the Spectacle for visitors to the property to see.

The latest achievement is the third Guinness World Record for MGM China, following two others set at its property on the peninsula for a 20-foot-long and 14-foot-wide dancing lion and the world’s most expensive cocktail, which sold for MOP94,880 in 2014.

Like Grande Praça at MGM Macau, the Spectacle is being used for events and exhibitions. At the Art Macao event to be held in June, MGM will be working with internationally renowned, cross-disciplinary artists to showcase a multimedia installation in the space.