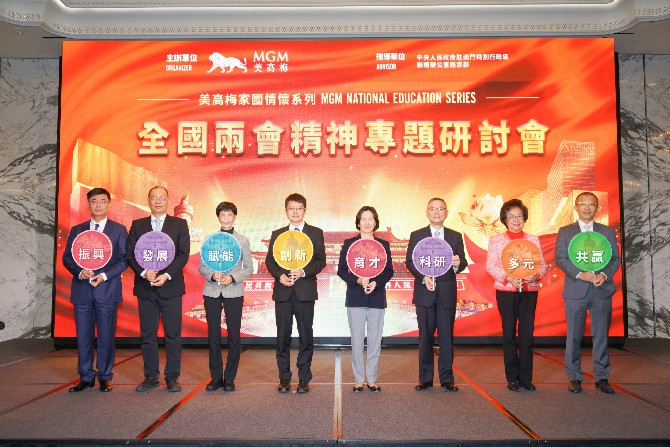 Following the conclusion of the Two Sessions, MGM China Holdings Limited (MGM) earlier hosted a “Sharing Session on National People’s Congress (NPC) and National Political Consultative Conference” to help its staff keep abreast of China’s development.
According to the group’s statement released on March 29, the event, which took place at MGM Cotai, was part of the group’s National Education Series.
MGM invited the city’s big names from local alliances and unions to expound on major policies set out at the “Two Sessions.” The speakers gave in-depth insights into the impact of these directions on the city’s economy.
Chui Sai Peng, a member of NPC, deputy delegation leader of Macau’s NPC delegation, and a member of the Legislative Assembly of Macau, was among the speakers at the event. He said the Two Sessions brought out new concepts designed to foster the development of the city, including Macau’s development of Chinese medicine, financial services and high-tech industries, and more.
Chui said Macau should proactively explore and grasp every opportunity. It is also essential for Macau to support the nation’s policies and stay innovative, he said.
Ho Sut Heng, a member of NPC and President of Macau Federation of Trade Unions (FAOM), said that China has focused on high-quality development in the future. She suggested that Macau enhance its competitiveness across different aspects and push forward with works regarding economic diversification.
Ho Teng Iat, Deputy Director of the Committee for Liaison with Hong Kong, Macao, Taiwan and Overseas Chinese under the National Committee of Chinese People’s Political Consultative Conference (CPPCC), a member of the Standing Committee of the All-China Women’s Federation and President of the Women’s General Association of Macau, called on the women in Macau to grasp opportunities brought about by the 14th Five-Year Plan.
Ho’s remarks came after President Xi Jinping said earlier that the nation’s women should be builders of great causes, advocates of civilization and go-getters who dare to realize their dreams.
“Our nation has embarked on a new journey to reach the second centenary goal, which coincides with the momentous post-pandemic economic recovery. MGM will join hands with team members to align with the nation’s development directions, and we pledge to contribute by making the best of our resources,” Pansy Ho, Co-chairperson & Executive Director of MGM, affirmed.
The event was also attended by Zuo Xianghua, Deputy Director General of Economic Affairs Department of the Liaison Office of the Central People’s Government in the Macau SAR, and key members of MGM.