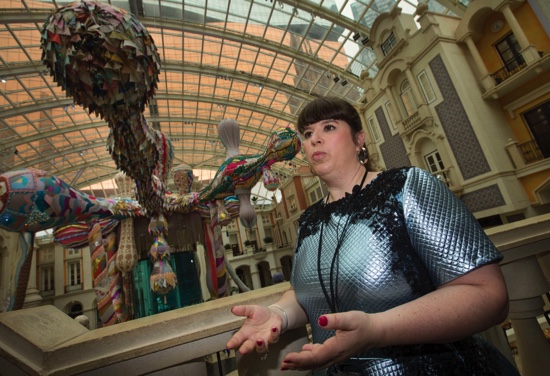 The MGM Macau and Joana Vasconcelos’ Charity Foundation are set to launch a fundraising campaign to help Orbis Macau, an organization raising public awareness over eye healthcare and blindness-
related problems.
Portuguese contemporary artist Joana Vasconcelos opened her first ever exhibition held in Macau last Sunday. Her “Valkyrie Octopus” installation will be displayed at MGM Macau’s Grande Praça until the end of October.
The young Portuguese artist’s foundation and MGM will be launching a fundraising program, having invited chef Oliver Weber and pastry sous chef Micky Ma to create pastries inspired by Joana’s artwork. MGM Macau revealed in a press release that it will double up all of the proceeds from the sales of the Valkyrie Octopus-inspired pastries, contributing them to a charity fund that will be donated to Orbis by the end of the exhibition.
Pastries will be available at the Pastry Bar and Grande Praça Café at MGM Macau between April and October. “The creations encase layers of rich hazelnut crème and crisps, a signature and most popular flavor of the property’s collection of sweets,” said MGM Macau.
Grant Bowie, CEO and executive director of MGM China Holdings Ltd., said, “We engaged Orbis as the beneficiary because vision and the visual arts have an intriguing correlation.” “While we hope our visitors appreciate this breathtaking masterpiece by Joana Vasconcelos, we also call on the local community’s generosity to support and help those with eye illnesses, so that they will have the chance to enjoy the beauty of the world surrounding us,” Bowie expressed.
Joana Vasconcelos commented, “I am happy and excited that I am able to inspire MGM Macau’s chefs through my work of art to create this special pastry, which will in turn help those in need through Orbis.”
Orbis is a non-profit organization working to prevent and treat blindness. Orbis Macau, a subsidiary of Orbis International, was founded in Macau in 2006. The organization aims to raise awareness of blindness-
related matters and to call for the Macau community’s support.
The Portuguese artist is known for using traditional feminine crafts such as crochet or textiles, as well as for using unconventional elements, to create edgy and imposing sculptures and installations. From conducting a controversial exhibition at the Palace of Versailles featuring two extravagant warlike lions covered in white lace napkins, to designing one of her most famous pieces, “The Bride” – a chandelier made entirely of tampons –
Joana has done it all. Her exhibition in Macau runs until October 31.  CP