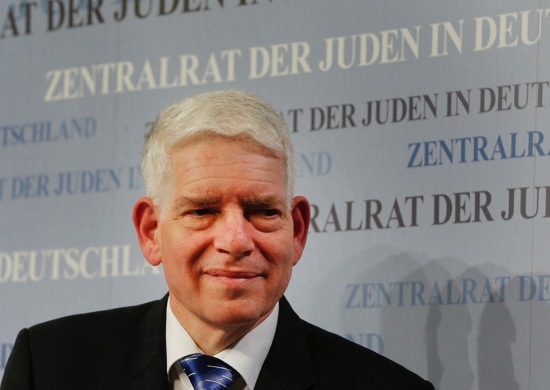 When the leader of Germany’s Jews spoke out against the flow of Muslim migrants to Europe, a rabbinical student denounced his views as racist — and ignited a debate over whether Jews are right to fear unprecedented levels of immigration from Muslim lands traditionally hostile to Israel.
The student, Armin Langer, was kicked out of the Abraham Geiger College in Potsdam after he wrote that the leader of Germany’s Central Council of Jews was wrong to seek a cap on Muslim immigration. Langer, a founder of an inter-faith group called Salaam-Shalom committed to fostering dialogue between Muslims and Jews, said his community should never cast an intolerant eye toward other minority groups.
“If one minority is treated badly, it won’t be long before all minorities will be treated badly,” Langer, 25, told The Associated Press during an interview in Berlin’s Neukoelln district, home to many Muslim immigrants.
Langer also participated in a small protest outside the Central Council’s headquarters in Berlin, the day after Joseph Schuster told German newspaper Die Welt last November that “sooner or later, we’re not going to get around upper limits [for migrants].”
Looking back, Langer says he now regrets the harshness of his language in his newspaper op-ed in daily die tageszeitung criticizing Schuster, but he also says the college was wrong “to try to suppress my personal opinions.”
Many in Germany’s 250,000-strong Jewish community expressed outrage at Langer’s remarks following their publication last year as Germany absorbed a wave of 1.1 million overwhelmingly Muslim migrants. They expressed support for Schuster’s stance that anti-Semitism was growing once again in Germany, driven by newcomers with attitudes hostile to Jews and Israel. Schuster had already warned earlier that Jews shouldn’t wear their traditional skullcap, or kippa, in areas with large Muslim populations.
“Many refugees are escaping the terror of Islamic State and want to live in peace and freedom,” Schuster said in his November interview. “At the same time, they come from places where hatred of Jews and intolerance are an integral part of the culture.”
Jewish fears of Muslim immigration reflect a spike in anti-Semitic attacks and anti-Israel protests by Muslim youths in Germany during Israel’s 2014 war in Gaza and the more recent mass killings by Muslim extremists in Paris, Copenhagen and Brussels, where Jewish institutions also have suffered deadly attacks. Berlin today is home to about 40,000 Jews, many of them 1990s-era immigrants from the former Soviet Union.
The college director, Rabbi Walter Homolka, said Langer’s criticism of Schuster had caused widespread offense among German Jews. He told the AP that Langer had violated his enrollment contract requiring students to avoid an “undue media presence.” He said Langer had been suspended for a year in January, with a right to re-enroll in 2017, following meetings of the school’s board of rabbis and the German General Rabbinical Conference.
But Langer, a Hungarian Jew, said he would continue to pursue a master’s degree in Jewish theology at Potsdam University and would seek to complete his rabbinical training elsewhere.
Schuster declined an interview with the AP. He said in a written statement he played no role in Langer’s dismissal but understood why it happened. He said rabbis should seek to promote balanced dialogue, not polarize opinion.
Shaked Spier, a German-Israeli activist who works in aid of recently arrived refugees, said it was absurd to attribute anti-Semitism primarily to migrants.
“There’s a deeply rooted anti-Semitism in German society. We shouldn’t pretend that it’s now being imported by the refugees,” said Spier, whose grandparents escaped Nazi Germany in the 1930s before the Holocaust claimed an estimated 6 million Jewish lives.
He said Schuster’s call to cap the numbers of asylum seekers made him particularly uncomfortable because it echoed the position of right-wing German nationalists, many of whom also hold anti-Semitic views.
Levi Salomon, spokesman for a Berlin lobbying group called the Jewish Forum for Democracy and Against Anti-Semitism, said migrants’ integration into German society needed to be swift and include classes “about the Holocaust and anti-Semitism.”
Fears of Muslim immigrants are palpable in some Jewish households. An Israeli mother of three told the AP she no longer allows her children to speak in Hebrew outside their Berlin home.
“When we are outside I tell my kids to speak only English,” said the woman, who spoke on condition that she not be identified by name, citing fears for her safety. “I’m too afraid that somebody will recognize that we are Jewish or Israeli and then harm us.”
Langer, who sheltered an Egyptian asylum seeker in his own apartment for several months, said such fears could be overcome only by direct dialogue between Jews and Muslims. He said Germany’s Jews should be more concerned about the steep rise of violence and almost daily attacks directed against the newly arrived refugees.
“What we really have to do now, as Muslims and Jews, is to fight together against anti-Semitism and Islam phobia in Germany,” Langer said. Kirsten Grieshaber, Berlin, AP