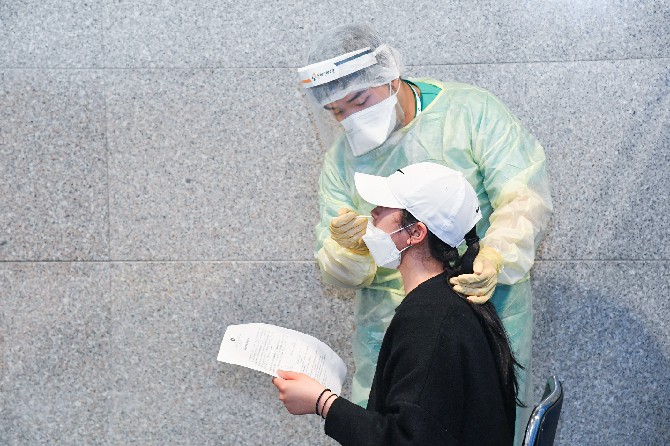 Patients who have a fever, except those with whose ailment has an obvious cause not related to SARS-CoV-2, will be tested for Covid-19 when they seek medical assistance at the three largest local hospitals, the Conde de São Januário Hospital, the Kiang Wu Hospital and the University Hospital at the Macau University of Science and Technology, Alvis Lo, director of the Health Bureau (SSM), announced yesterday.
The health official did not explain why the private Yin Kui Hospital, which is located within a commercial building, is not included.
A polymerase chain reaction (PCR) test will be conducted on patients who present a fever, regardless of their travel history or their occupational risks.
Once a sample is collected from the patient, their Macau Health Code will immediately be changed to yellow, indicating that they should practice self-health management and avoid crowded places. They will also be barred from entering resorts, hotels and casinos.
“They are suggested to stay home,” Lo added.
If a negative Covid-19 result is returned, their Health Code will be changed to green.
At first, the health official said that PCR test would be conducted on all patients who have a fever. Later, when he was asked to confirm this with particular reference to whether newborns and infants are included, he then clarified that there are spaces for exceptions, saying, “For example, if the patient is suffering an acute appendicitis, of which fever is a symptom, we will not conduct PCR test on this patient.”
The new measure is in place as the health authority wants to identify potential Covid-19 patients as early as possible. Lo stressed that it aims at pick out those who may have a fever caused by SARS-CoV-2.
When asked whether non-Macau residents can acquire a Covid-19 vaccination in Macau, the medical doctor explained that if a non-Macau resident who is not a non-resident worker or a foreign student in Macau has stayed for more than three months in Macau across the preceding six months, they can receive the jab at their own expense.
Gov’t clarifies ‘fake
news’ on IVS suspension
Yesterday the government issued a statement to clarify a piece of old news about China’s suspension of the Individual Visitor Scheme (IVS), a screen cap of which has been circulating online.
On Sunday evening, some social media users made an effort to clarify the content, saying that the screen cap was from a news report posted on January 28, 2020, during the period when the outbreak intensified across mainland China.
The clarification from the Novel Coronavirus Response and Coordination Center was similar to social media users’ clarification, offering identical dates and content about the news item.
However, the center emphasized the collaborative prevention and control mechanism set up by both Macau and Guangdong Province. It explained that, given the interactions between the two places are so dynamic, any change to the existing immigration measures will be announced immediately.
Similar to most government clarifications, the center also warned that any individual disseminating false information would be subject to criminal prosecutions. Such information, it stressed, can invoke social confusion and emotional disturbance.