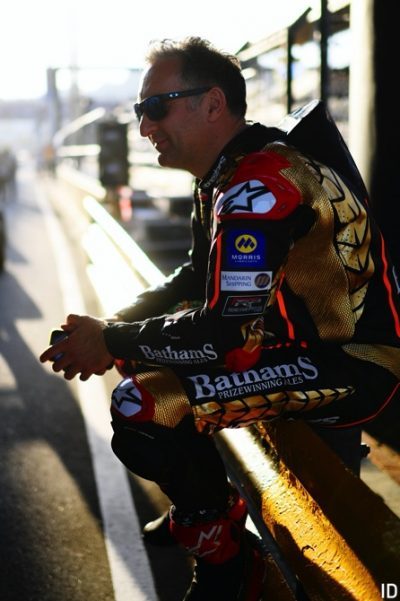 Michael Rutter, who was handed victory in this year’s Motorcycle GP

The decision by the Macau Grand Prix Organizing Committee (MGPOC) to hand out a final classification for this year’s interrupted Macau Motorcycle Grand Prix (GP) appears to contradict the sporting regulations published for the 53rd edition of this event.

Approved by the governing body for local motorsports, the Automobile General Association Macao-China, the Sporting Regulations under the responsibilities of the MGPOC Sporting Subcommittee indicate that the race should have been declared “null and void”.

Under article 46, which governs the “Interruption and Restarting of a Race,” it states that in the event of a situation where the clerk of the course decides to interrupt a race, the results will be calculated as follows: “If less than three (3) laps have been completed by the leader of the race and by all other riders on the same lap as the leader, then the race will be null and void and a completely new race will be run.”

The paragraph also states, “If it is found impossible to re-start the race, then it will be declared canceled.”

The situation provided by the event’s sporting regulation matches the circumstances that occurred during the Motorcycle GP, when six riders were involved in a multi-vehicle crash at Police Bend which resulted in three riders being injured.

At the time, the initial information provided by an MGPOC staff member was that there were no results or victory attributed. It was then said that due to the impossible nature of including a new race in the program on the last day of the GP, the race would be canceled, according to article 46 of the sporting regulation.

The decision was not well received by teams and riders who rushed to criticize the MGPOC, with Peter Hickman, the leader of the race and the fastest rider over the whole weekend, expressing his displeasure over the decision, as the Times reported previously.

The MGPOC then decided to take a different approach, handing the victory to Michael Rutter based on the results of the only lap that had been fully raced after the restart. This second decision, which was also poorly received by the drivers and their teams, at least allowed the participants to collect their prizes.

Even Rutter, the rider who was attributed the win, was not happy with the decision. “It’s a shame [for] the event. It’s a shame for all the teams. It is always good to have a race,” Rutter said, according to a report from TDM Radio.

On Sunday, during an evaluation of the event of this year, MGPOC president and chief of the Macau Sports Bureau, Pun Weng Kun, refuted the idea that there was a “first statement,” saying that there was only one official statement and that was the one about the decision to attribute the results based on a single lap.

In the MGPOC statement on Saturday following the publication of the final classification, the organizers said, “there was no opportunity to re-start the race for the second time. Regulations dictate that the result must be declared based on a single lap of the second race.”

It was not clear which rule was used to award the victory to Rutter.

Rutter apologized to his teammate Hickman on social media, with a note to say, “Just heard that I’ve been given the win for today’s race. It’s a bit of a shame because Peter really deserved it. Sorry Peter.”

Contacted by the Times to clarify the decision, the MGPOC said that the decision was made in a meeting held on November 16 and based on “article 17 and article 46.2 of the 53rd Macau Motorcycle Grand Prix Sporting Regulations – 2019.”

Contrary to article 46.1, as already cited by the Times, article 46.2 refers to a situation in which “three or more laps have been completed… but less than two-thirds of the original race distance… the race will be restarted.”

Article 17, which was also noted in the MGPOC’s statement, discusses the “Interpretation of the Regulations” and states that “the interpretation of the Regulations, Bulletins and the choice of sanctions where the present Regulations have not automatically stipulated these, falls to the Race Direction,” whose decision is considered final, except in the situations susceptible to appeal by the stewards, which is not the case here.