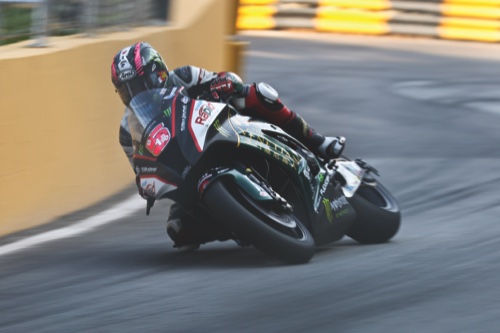 Stuart Easton got a perfect start from pole position to claim his fourth Guia Circuit victory in four attempts by winning the Macau Motorcycle Grand Prix – 48th Edition. Incredibly, there was a three-year gap between his last win and this one, but no one at the circuit would have known, based on his performance.
Increasing his advantage by over a second per lap on every one but the last, Easton rode the PBM by The Venetian Hotel Kawasaki to a margin of victory which dropped from 17 to 14 seconds, as he visibly eased off and cruised the last couple of laps. 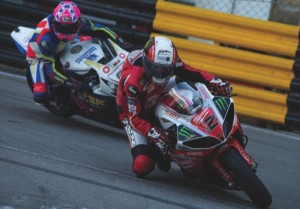 “It didn’t feel that easy! The plan worked, which was to get away in front and settle in for a couple of laps, and try and set a pace that I felt fast enough but still comfortable with so if anyone came with me, we could race at the end. It’s nice to win on my return, having missed three years, to take pole and to win. I couldn’t have asked more from the tyres, from the bike, and from the whole team.”
His relaxed ride was in stark contrast to the huge battle behind him as half a dozen riders clashed over the last two podium places. Ian Hutchinson, on the second of the Paul Bird machines, launched an early bid for glory at Lisboa on lap one but overcooked it and took to the escape road.
Eight-time winner Michael Rutter started slowly from second on the grid, but soon put the Milwaukee Yamaha back in second place. After clattering the wall at Donna Maria in his pursuit of Easton, he decided second place would suffice – and immediately regretted the decision. He spent the next ten laps fending off first Lee Johnston and then Gary Johnson, and finally Martin Jessopp.
“We knew Stuart was going to be competitive, but he’s done a brilliant job. I got a real bad start. I got through and thought, ‘right, I’ve got to get my head down and get on the back of him straight away’ and I clipped the wall. Then I thought I’d try and keep second and if I stayed smooth I’d be [fine], but that wasn’t the answer – Lee [Johnston] passed me, Martin passed me. We kept passing but it was all clean racing. I could hear them coming at the hairpin and I thought, ‘I just wish they’d clear off!’”
While Rutter’s second place was hard-won, Jessopp finished third by fighting his way forwards, finishing half a second behind the Yamaha and only a second clear of Gary Johnson.
“We put on a good show. We had a fuse go on the bike yesterday and that cost us, as we had to start way back on the grid. It was good fun, a good battle and we thought we might as well take it to Michael, me and Gary [Johnston], but Stuart’s made us all look a bit silly today.”
For Easton, it was the perfect Macau comeback: “I’ll come back for sure!”
He’s hardly alone, and it’s not just the bike riders anxious to return – the dates have already been decided: the next Macau Grand Prix takes place on 12th – 15th November 2015.