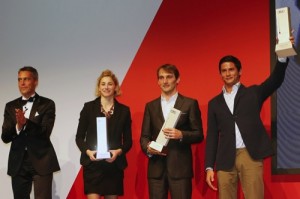 Alex Yoong, a former Formula 1 driver from Malaysia, was crowned 2014 Audi R8 LMS Cup champion after securing a controversial victory in the final race in Abu Dhabi.
Yoong topped the standings going into Abu Dhabi with 156 points, followed by Macau’s André Couto (149 pts), who won the first leg in Abu Dhabi and overtook the Malaysian in the championship. In the last race of the championship, Couto started from the pole with the maximum weight ballast of 60 kg, meaning Yoong, in position two, had a weight advantage.
Both contenders stormed ahead as soon as the lights went off. According to the Audi R8 LMS Cup official webpage “throughout the race, Yoong and Couto put their all into the battle for first place, with each taking it in turns to lead.”
However, Yoong managed to keep just ahead of Couto in the last few laps, and finally took the checkered flag. Since Couto finished in second place, he had enough points to be the champion. The Macanese racer celebrated his victory on social networks but the organizers later announced that, despite finishing second, he was handed a 25 second penalty after the race, due to overtaking Yoong while off the track and failing to yield the position within a reasonable time. The penalty means that Couto finished ninth in the last race, and had to settle for the runner-up spot in this year’s championship.