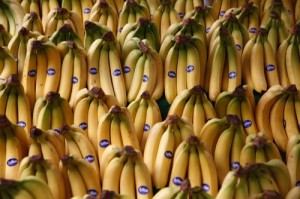 Exports of bananas produced in Mozambique brings in over USD70 million per year, according to António Gomes, vice-
president of the Confederation of Economic Associations (CTA) with responsibility for agricultural business.
Gomes told Mozambican weekly newspaper Domingo that, alongside efforts to produce quality bananas, prices in South Africa had increased, which benefitted Mozambican businesses and the economy.
The official gave the example of Belúzi Bananas, a company located in the region of Boane, in Maputo province, which this year has an export target of 1.2 million boxes (cartons) of bananas to South Africa, worth 100 million rand (about US$10 million).
Banana companies currently export an average of 80 refrigerated trucks per week to the South African market, or more than 2,000 tons of bananas per week or 100,000 tons a year.
The United Nations Food and Agriculture Organisation (FAO) puts Mozambique in third place in the list of top banana producers in Africa, second only to the Ivory Coast and Cameroon.  MDT/Macauhb