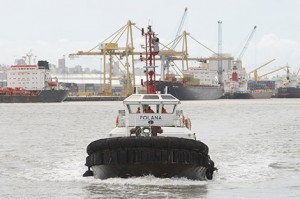 The Port of Maputo will receive investments in the coming years to increase its cargo processing capacity from 40 million to 50 million tons by 2020, said the president of the Maputo Port Development Company (MPDC).
Osorio Sales Lucas, speaking at the launch of the Joint Operation Centre (JOC) of the Maputo Corridor, which includes rail operators Portos e Caminhos de Ferro de Moçambique, Transnet Freight Rail of South Africa and Swaziland Railway, in conjunction with the MPDC, said that one purpose of the investment was to shift more freight from road to railways.
Part of the investment will be channeled into construction of three new docks and dredging to increase the depth of the port from its current 11 meters to 14 meters, enabling larger draft vessels to moor at the port.
The chairman of the MPDC said that a tender would be announced in the coming months to ensure that new dredging operations are carried out by a company with capacity to carry out the work and that meanwhile Italeni, Transnet Freight & Rail’s new dredger, was due to arrive in Maputo this week for maintenance dredging.
At the same time, Portos e Caminhos de Ferro de Moçambique plans to invest USD1 million in infrastructure and rolling stock to allow most of the cargo sent to the port of Maputo to arrive by rail, rather than by road as is currently the case.
The MPDC, which is a partnership that includes South Africa’s Grindrod and DP World of the United Arab Emirates as its main shareholders, handled 17 million tons of cargo in 2013, which is expected to increase to 19 million tons this year.
In operation since 2013, the JOC, which coordinates the operations of Transnet Freight Rail, CFM, Swaziland Railway and the MPDC has introduced improvements, including reduction of waiting times by 24 percent in Komatipoort and the port of Maputo by 57 percent, while South African exports of magnetite increased from an average of 10 to 18 trains per week.  MDT/Macauhub