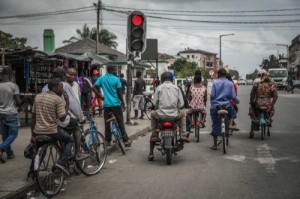 Mozambique’s projected average annual inflation in 2014 has been revised downwards from 3.9 percent to 3.0 percent by the Economist Intelligence Unit (EIU) which also increased the forecast budget deficit for this year by 10 basis points to 10.1 percent.
The 3.1 percent average recorded in the annual inflation rate in August, together with an international climate characterized by lower food prices and a marginal decline in the value of oil, were behind the review, the EIU said in its macroeconomic analysis of the country for September, to which Macauhub had access.
The budget deficit projection rose slightly from 10 percent to 10.1 percent of gross domestic product (GDP), which the EIU said was the result of a combination of decreased international donor assistance to the State and increased public spending.
In the document, the EIU kept its forecast for economic growth in Mozambique in 2014 unchanged at 7.3 percent, for a real value of GDP of US$16.2 billion, with the Industrial sector registering growth of 9 percent, Services of 7.2 percent and Agriculture of 6 percent.
In terms of exports, the EIU expects Mozambique to reach USD4.4 billion in 2014, gradually rising to US$6.8 billion in 2018, when the value of imports is expected to be around US$12.8 billion due to importing equipment for exploration of natural resources.  MDT/Macauhub