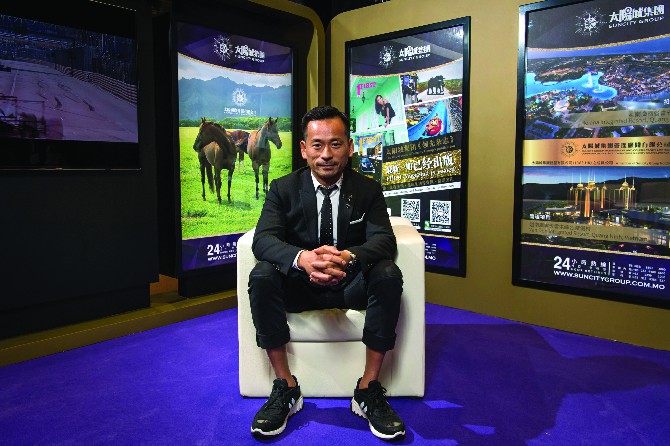 Suncity Group CEO Alvin Chau has been detained and put in preventive custody by the judge that is overseeing the case.
Chau was transferred to Coloane Prison after a long interrogation by the Public Prosecutions Office (MP). The judge in charge of the accusation and further investigation on the case decided that he will await trial while under arrest.
Chau is suspected of leading a criminal organization dedicated to illicit gambling exploitation and money laundering, the Judiciary Police (PJ) announced on Sunday after the CEO of the VIP Gaming promoter was detained for interrogation on Saturday.
According to the PJ report, the case involves a total of 11 people who were all handed over to the MP.
Chau and another man are accused of leading the organization, while the nine other suspects are alleged participants in this organization.
The case involves accusations of establishing gambling platforms and conducting criminal activities related to online investment methods.
Preventive custody is the more severe of the measures authorized for suspects waiting for trial and is applicable in cases where the suspect is facing a sentence of over three years of imprisonment and where there are fears that, if the suspect remains free, they might attempt to escape trial, damage or taint relevant evidence or interfere somehow in the investigation of the case.
Preventive custody is also applied when the suspect is caught on the run or is waiting to be transferred to another jurisdiction.

Case prompts inquiry to Security Chief
Although he did not specifically mention names or the specific case involving the CEO of Suncity Group, Alvin Chau, lawmaker Ip Sio Kai questioned the relation of the National Security law and the capacity of mainland authorities to intervene in certain cases.
Ip specifically referred to Article 303 of the Criminal Law of the People’s Republic of China that reads, “Whoever, for the purpose of reaping profits, assembles a crowd to engage in gambling, opens a gambling house, or makes an occupation of gambling is to be sentenced to not more than three years of fixed-term imprisonment, criminal detention, or control, in addition to a fine.”
Ip wanted to know how this article could be applied in Macau or to Macau residents involved in activities related to the gaming industry.
Without providing a detailed answer, Wong said only that the jurisdiction of the mainland on this matter “can only be exercised in cases where these crimes are committed in the mainland and not in Macau,” hinting that if local residents are accused of such activities in the mainland, the central government can exercise this jurisdiction.