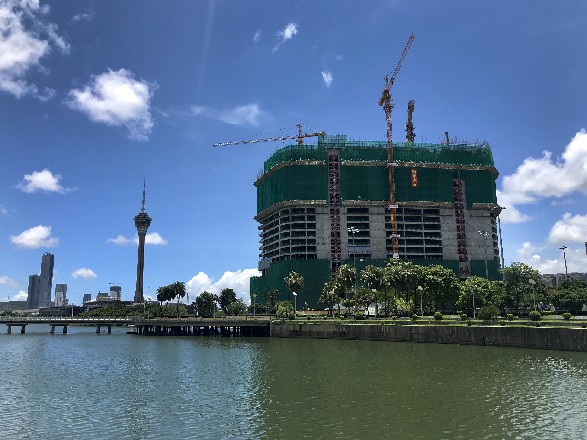 An under-construction hotel project by Nam Van Lake might serve as a foothold for Genting if the international casino operator decides to try its hand for a Macau gaming concession when the current six expire.
The project, provisionally titled “Resorts World @ Macau”, sits on a premium land parcel by Praça de Ferreira do Amaral, bulging into Nam Van Lake in the southern part of the Macau Peninsula. It is being developed by Treasure Island Entertainment Company, a local enterprise indirectly owned by Star Cruises, part of Genting Hong Kong, which promised to develop the property with or without a casino.
“Nobody would construct a hotel in that premium location without gaming,” said Ben Lee, managing partner of IGamiX Management & Consulting, when asked about the project.
“It’s likely to be a four to five star hotel […] but, as we all know, a hotel without gaming is not a worthwhile investment in Macau,” said Lee.
The biggest question surrounding the new development is whether Genting Hong Kong will operate a future casino there with its own gaming license or through a partnership with one of the incumbent operators.
The property is tentatively set to open in 2022, the same year as Macau’s casino concessionaire agreements expire.
Some analysts expect the Macau government will extend the concessions while the details of a new tender are being arranged. A renewal of up to five years from the end of the 20-year term is allowed under Macau gaming law.
Before then, the project will only be able to operate a casino under a service agreement extended by one of the six concessionaires.
Lee declined to speculate on which Macau concessionaire would be interested in extending such a service agreement, but said historically, “SJM would be the most likely.” SJM manages the largest number of so-called “satellite casinos”, with most of their partner properties on the Macau Peninsula.
Earlier this month, Wynn Macau Vice Chairman Linda Chen was reported to have attended a topping-off ceremony for the project’s construction, prompting some to speculate about a possible link. However, the American-owned concessionaire told GGRAsia that it had no affiliation with the new hotel project and said that Chen had been only “invited as a guest.”
Lee previously told the Times that he considers Malaysia’s Genting as the only outsider contender with a real chance of grabbing a license.
“If they win a concession, they can convert this property into a casino while negotiating another parcel of land, possibly from one of the losing concessions,” Lee told Macau Daily Times. Plus, “it would help to have a local management team here,” he said, adding that there are experienced, non-local executives being made redundant by the existing concessionaires that could be recruited by Genting.
“I don’t think that having this project [already operating] will enhance their position to win a concession, but it might enhance their profitability and help to generate cash flow [in the early period of the concession],” added Lee.
Repeated attempts to reach officials at Genting Hong Kong Ltd. went unanswered last week. A senior executive at Malaysian conglomerate Genting Group said she was unware of a hotel project being developed in Macau at all.
Genting Chairman Lim Kok Thay has not wavered from pursuing a Macau gaming license since the operator lost its bid in the 2002 tender.
In pursuit of that license, Genting had tried to establish a venture with the late gaming tycoon Stanley Ho. However, according to Bloomberg, the Macau government viewed the partnership unfavorably, considering that it would allow the consolidation of two major companies in the sector and lead to unfair competition.
Despite losing the 2002 tender, Genting has shown renewed interest in the Macau market on multiple occasions, most recently in March 2018 when the company attempted to enter the market through the acquisition of shares in Wynn Resorts.
The shares went to Galaxy Entertainment Group instead, leading the Macau casino operator to command a stake in its U.S.-based competitor of just under 5%.
In 2014, when the preparatory works for the project began, Treasure Island described the 21-storey property as a low-rise boutique hotel that would provide “hundreds of rooms.”
According to information made available by the Land, Public Works and Transport Bureau (DSSOPT), the bureau approved an extension to the building construction license granted in mid-July 2017 for a period of three years. The land development usage period expired earlier this month and it is not clear whether an extension was ever granted.
In response to a Times enquiry, the DSSOPT declined to make any specific comments on the construction works, confirming only that the land plot development was being managed according to the terms of its usage. Daniel Beitler & Renato Marques