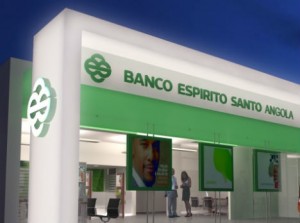 The solution adopted for Banco Espírito Santo Angola (BESA) will enable the Angolan financial system to remain stable and assure continuity of the relationship between that bank and its depositors, the head of the National Bank of Angola (BNA) said on Monday in Luanda.
José de Lima Massano specified that the central bank will continue providing necessary support to safeguard depositors’ interests, announcing a package of extraordinary measures for BESA’s recovery.
At stake is “degradation of the loan portfolio” of BESA, 55.71 percent of which was held to date by Portugal’s Banco Espírito Santo, and this has “affected liquidity and solvency levels,” Massano said.
One of the announced measures already approved by the BNA administrators is the naming of a new BESA board of directors, which will hold office for a maximum period of one year.
In the scope of those measures, the Angolan central bank revoked the sovereign guarantee worth US$5.7 billion dollars in BESA’s favour and the grant to that bank of US$5.1 billion “to assure its continued financial stability.”
BESA is a private capital banking institution in Angola, which began operations on 24 January 2002. MDT/Macauhub