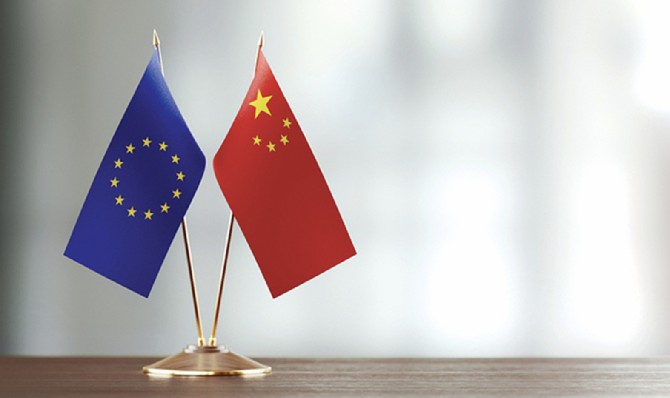 China slammed the European Parliament’s adoption of a new EU-China strategy, which comments on China’s political, economic, social and foreign policies, and makes accusations against China on issues related to Hong Kong, Xinjiang and Taiwan.
This follows a landmark report yesterday in which the European Parliament urged the European Union to adopt a new China strategy, focusing on the Chinese government’s alleged human rights intrusions.
According to the spokesperson of the Chinese Mission to the EU, the comments were “based on prejudice and lies.”
In the document, it was mentioned that Macau was prohibited to hold “ceremonies to mark the anniversary of the Tiananmen massacre and media organizations [were pressured] to adopt a pro-China editorial line. This summer, the Chinese authorities excluded 21 candidates, most of whom members of pro-democracy movements, from participating in the next legislative [election].”
The amendment to the EU’s strategy also calls on China to respect the Sino-Portuguese Joint Declaration and the Basic Law of Macau which will be in force until 2049, “stopping any interference in the electoral processes and the functioning of the media.”
The document has now also included mention of Macau in its call to protect human rights and support for the public. Prior to this amendment, Macau was not included.
The new EU-China strategy report recognizes that China is a “cooperation and negotiating partner” for the EU. However, it highlights differences in ideologies and values, and highlights that China and the EU are systemic rivals.
“This is certainly not the right way to improve and develop China-EU relations. We disagree with this view,” the Chinese Mission spokesperson commented.
“This constitutes a gross interference in China’s internal affairs and a violation of basic norms in international relations as well as the EU’s commitments on relevant issues. China is firmly opposed to it,” the spokesperson added.
The official hopes that the EU side will “pay attention to these rational voices, take a comprehensive and objective view of China’s development and do more to promote the development of bilateral relations.”
In a report adopted yesterday — by 570 votes in favor, 61 against with 40 abstentions — the European Parliament outlines six pillars on which the EU should build a new strategy to engage with China: cooperation on global challenges; engagement on international norms and human rights; identifying risks and vulnerabilities; building partnerships with like-minded partners; fostering strategic autonomy; and defending European interests and values.

Macau gov’t says elections for the AL ‘are internal affairs’

The Macau SAR government late last night expressed its “resolute opposition,” saying it “deeply regrets the content concerning Macau” of the report on a New EU-China strategy approved by the European Parliament.
“Elections for the VII Legislative Assembly (AL) were held in an orderly manner and in compliance with the Basic Law of the Macau Special Administrative Region of the People’s Republic of China, the note sent to the newsrooms added.
The statement considered that the elections for the AL “are internal affairs of the Macau SAR, and therefore no foreign institution, including the European Parliament, has the right to intervene.”
The SAR government “continues, as always, to guarantee the freedom of the press and the fundamental rights of Macau residents, in accordance with the Law,” said the local authorities.