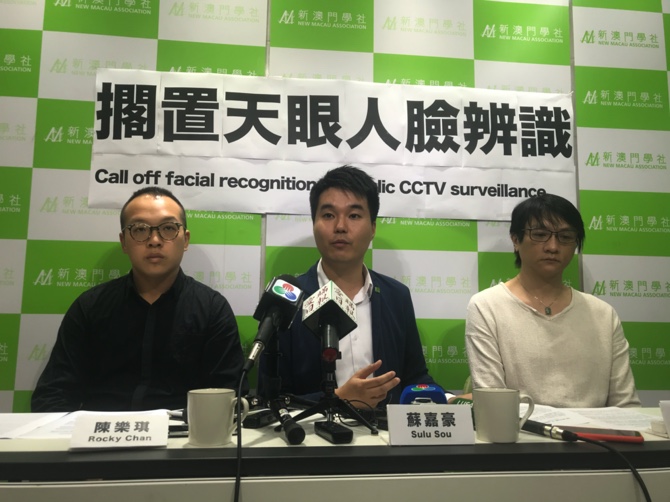 ANM member and lawmaker Sulu Sou said that the association and many members of the public have been requesting that the government explain, in detail, the legal grounds for the implementation of facial recognition, the relevant specific implementation plan and the relevant public monitoring mechanism.

If the government does not respond to the people’s request, “the trial must be put on hold.”

According to the ANM, the current CCTV surveillance law in Macau does not contain clear rules for facial recognition monitoring.

As of today, the local government has not explained how facial recognition will meet current legal requirements.

Sulu Sou reminded the public that facial recognition is “an extremely sensitive issue in the international community” and is “a kind of mass surveillance that involves collecting biological and behavioral characteristics that can identify any individual.”

The collection of the abovementioned characteristics allows individuals’ actions to be monitored, tracked, calculated, analyzed and judged by computer systems.

“Without adequate legal protection and monitoring mechanisms, the privacy rights of all Macau citizens will be placed in a dangerous situation,” said Sou.

“The security authority is avoiding talking about the core issue. The Public’s concerns are not resolved,” said Sou.

The ANM wants the local government to provide clarification regarding the scope and process of the collection of personal data, as well as of the type and technical characteristics of the equipment used.

Particularly, the ANM wants the government’s answers regarding potential and highly controversial practices, such as the establishment of a large-scale database to collect personal data.

“The ANM believes that even though GPDP has the power to issue legal-biding opinions on the CCTV surveillance system in accordance with the law, in the absence of disclosed detailed information, there is no possible condition for [the] strict protection of privacy in Macau,” Sou stated.

The security authority often refuses to be transparent with information regarding law enforcement’s use of CCTV surveillance, on the grounds of public safety or police secrecy. Such a situation makes it difficult for the public and even for GPDP to monitor whether there is abuse or illegality during its actual operation, according to the ANM.

The government’s insistence that the current monitoring mechanism is sufficient is one of the main reasons for the public’s distrust of the government.