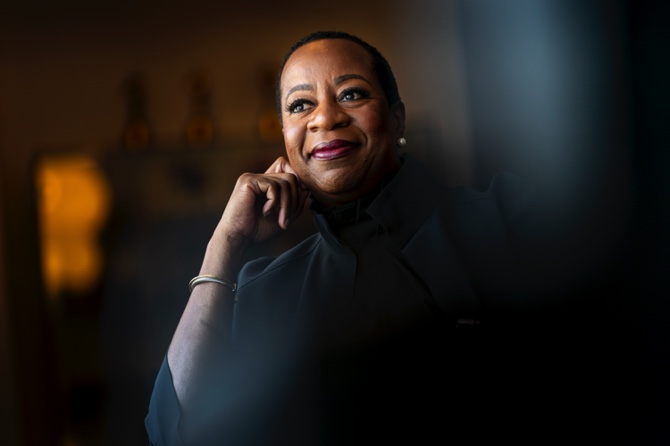 Angela Williams’ first year as United Way Worldwide’s president and CEO has been marked with challenges: rising inflation, the war in Ukraine driving increased demand for charitable services, and the need to rebuild public trust in her organization.

As the first Black leader of United Way Worldwide, the former Air Force attorney and former head of Easterseals feels she is ready to lead the organization, once known for its blockbuster workplace giving fundraisers, into its next era.

“Being in situations over my lifetime where I have been the first or only woman or Black person and breaking what I call not just glass ceilings, but concrete ceilings and breaking through” has prepared her to deliver on this promise of more equitable services, Williams said.

She plans to bring this uniquely American institution’s focus back to the communities, listening to individuals to shape solutions to their problems with the help of United Way’s considerable resources. In 2020, the organization gave more than $168 million in grants.

Williams has kept a low public profile in her first year, opting for a listening tour of United Way affiliates around the world and reexamining the organization’s commitments and priorities.

“My vision for United Way Worldwide is to create equitable solutions in communities,” Williams said, adding that people experiencing problems should have a voice in solving them.

United Way’s national 211 call line connecting people to services has seen an increase in requests in the last couple of months, with people needing help accessing food, paying their utility bills or rent, and finding housing, she said.

“I feel this real sense of urgency,” Williams told The Associated Press in an interview. “Whether it’s government, whether it’s the nonprofit sector, whether it’s philanthropy, foundations, individuals — we have to come together because there is so much pressing need.”

Williams took over United Way Worldwide after three former employees accused it of tolerating a culture of sexism and misconduct and retaliating against them for speaking out.

An outside investigation commissioned by the organization found in February 2021 there was no evidence of “actionable harassment, discrimination, or retaliation.” The three women who filed complaints with the Equal Employment Opportunity Commission told The Associated Press at the time that the law firm conducting the investigation had not contacted them. The organization’s CEO Brian Gallagher resigned shortly after.

During the Second World War, local United Ways consolidated their hold over workplace giving, by allowing employees to donate a portion of their paycheck automatically to the organization. The United Way would then regrant the pooled funds to local human service nonprofits like the YMCA or Salvation Army.

The model initially served a number of constituencies. It consolidated charitable requests directed to corporations and created a new group of middle-class donors who felt positively about giving to organizations that supported others in the place they lived.

But starting in the 1970s, several forces challenged workplace giving and United Way’s dominance as a distributor of large amounts of funding. The nature of work began to change, with the decline of large manufacturing employers and a transition to service work. That decline was compounded by growing social movements for civil rights, women’s rights and the protection of the environment, for example, creating new communities that donors identified with and wanted to support.

“From that point on, the United Way has struggled to get as much money and to stay relevant as this kind of centralized, trusted entity between donors and the charitable recipients,” said Emily Barman, a professor of sociology at Loyola University Chicago, who wrote a book about the organization.

To adapt, local United Ways, which pay membership dues to United Way Worldwide but are incorporated as separate nonprofits, sought to reduce their overhead and many chose to fund a smaller number of key partners instead of giving smaller amounts to a larger number of nonprofits.

Laurie Paarlberg, who studies community foundations at the Lilly Family School of Philanthropy at Indiana University, said affiliates also looked to governments and foundations for funding while others tried to establish endowments, solicit larger gifts from long-term donors and create giving circles around identities groups.

“The United Way has now been buffeted by a whole storm of connecting events that have influenced their role in their community, their revenue generation and then ultimately, their perceived legitimacy,” Paarlberg said.

The maelstrom that Williams stepped into also includes a large outlay of cash initiated under her predecessor as part of a partnership with Salesforce to create a software product, Philanthropy Cloud. United Way Worldwide’s tax filings show it paid more than $40 million between 2017 and 2020 to the company and a related contractor.

The software, which United Way Worldwide had the exclusive right to resell, competes with other programs that allow employees to donate from their paycheck to the charity of their choice (not just United Way) and to find volunteer opportunities.

Asked whether she thought the investment was worth the cost, Williams said it was a good start but that technology was a means to an end and not a solution by itself.

“My team and I are in the process of reevaluating a number of investments as part of a larger effort to right the ship and ensure that United Way Worldwide is sustainable and impactful for years to come,” Williams said. THALIA BEATY, ALEXANDRIA (Va.), MDT/AP