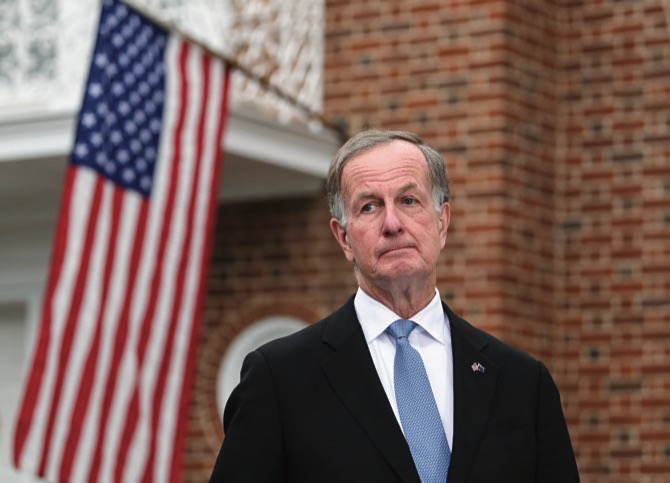 The new U.S. ambassador to Australia said yesterday that he’s concerned about the way China lends money to developing Pacific nations in what he describes as “payday loan diplomacy.”

Arthur Culvahouse Jr. told reporters in Canberra that it was up to U.S. allies and Western liberal democracies to educate people about the dangers of such loans.

“I would use stronger language. I would use payday loan diplomacy,” Culvahouse said.

He said “the money looks attractive and easy upfront, but you better read the fine print.”

China categorically rejects accusations that it uses loans, grants and other financial inducements to extend its diplomatic and political reach, saying it is merely acting in the best interests of both sides in such transactions.

It is especially sensitive to “debt trap” claims related to projects under its gargantuan “belt and road” infrastructure initiative, a signature policy of President Xi Jinping.

Yet, China has largely ignored criticism of its dealings with Sri Lanka, where that country was forced to hand over a port, airport and land for development after it was unable to repay billions of dollars in Chinese loans, and has sought to blunt criticism from Malaysia and others over the terms of projects backed by Chinese loans.

At a daily briefing in Beijing, foreign ministry spokesman Lu Kang said China had noticed that “some U.S. officials keep picking on the mutually beneficial cooperation between China and other countries, including the South-South cooperation with Pacific island countries.”

“I hope that they will correct their attitude, keep in mind the long-term interests of those developing countries, and do those things that are conducive to the countries’ long-term development, rather than stirring up trouble out of nothing,” Lu said.

The U.S. and Australia have their own infrastructure investment projects in the region.

Last July, the U.S. Overseas Private Investment Corp., the Japan Bank for Investment Cooperation and the Australian government announced a partnership to invest in Asia-Pacific infrastructure.

The partners said in a joint statement at the time that good investments stem from transparency, open competition, sustainability, adhering to robust global standards, employing the local workforce, and avoiding unsustainable debt burdens.

In November, Australia announced a USD1.4 billion Australian Infrastructure Financing Facility for the Pacific to provide grants and long-term loans for investments in telecommunications, energy, transport and water infrastructure.

While China is a major customer for Australian products from iron ore to higher education, frictions have arisen between them over Canberra’s treaty ties with Washington and accusations of Chinese meddling in Australian politics.

Culvahouse dampened expectations that President Donald Trump might visit Australia any time soon, saying he’d talked to the White House before he’d left and while a presidential visit remained a possibility, Trump had “a busy schedule.”

“I do expect a number of very senior administration officials with whom I met to visit Australia this year,” he added. AP