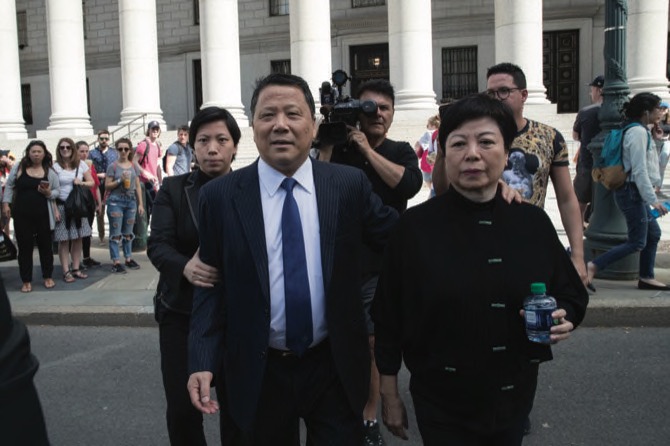 A local billionaire was sentenced to four years in prison on Friday for bribing United Nations officials to buy their support for a proposed UN center in Macau that was never built.

Ng Lap Seng, one of China’s richest men, had no visible reaction to the sentence imposed in federal court in Manhattan. Before hearing it, he had told the judge he was “full or regret” over his conviction on charges accusing him of paying the UN General Assembly president and another ambassador USD1.7 million in bribes.

“I’m very sorry for any suffering I’ve caused my family, my friends and my employees,” Ng told U.S. District Judge Vernon Broderick Friday, reading from a prepared statement, his hands shaking. “I promise, I will never repeat my mistakes.”

“I want to apologize to the court for all of the trouble my actions have caused,” Ng added through an interpreter.

The defense had sought a non- prison sentence for a 69-year-old defendant it described as a devoted family man and philanthropist. But Broderick said he deserved time behind bars plus a $1 million fine, in part because he threw his money around without pausing to consider the consequences. “Instead, you became more aggressive as time went on,” Broderick said.

Ng, who speaks Cantonese, listened to a translation of Broderick’s comments through headphones. More than two-dozen family members and friends attended the sentencing in Manhattan federal court. Some of them had traveled from China and sat in the gallery with headphones, listening to the translation.

The judge ruled Ng could remain under 24-hour guard at a Manhattan apartment on $50 million bail until he has to report to prison in mid-July. One of his defense attorneys indicated the sentence would be appealed.

In statement after the verdict, the U.N. said it “had cooperated extensively to facilitate the proper administration of justice in this case, by disclosing thousands of documents and waiving the immunity of officials to allow them to testify at trial.”

A jury had found Ng guilty last year of bribery, conspiracy and money laundering — a triumph for prosecutors who navigated thorny legal issues surrounding immunity given to U.N. diplomats before winning the cooperation of suspended Dominican Republic Ambassador Francis Lorenzo.

Lorenzo, who pleaded guilty, testified that Ng initially paid him $20,000. It was boosted to another $30,000 a month in exchange for getting Ng’s construction business named on official UN documents as the company that would build the Macau center for Southern Hemisphere nations.

Defense lawyers contended the payments were ordinary. They blamed Lorenzo and the other ambassador — U.N. General Assembly President John Ashe of Antigua and Barbuda — for manipulating Ng. Ashe, who also was arrested in the case, died in 2016 in an accident.

Ng has been confined to his multimillion-dollar Manhattan apartment, with four bedrooms and 3 1/2 baths, a cook and masseuse, since shortly after his arrest. He told probation officials that his living expenses in New York are about $20,000 a month.

Prosecutors said Ng’s plan was to build a permanent home for an annual UN conference on economic cooperation among developing countries, to be located on a man-made island off the coast of Macau, for free to boost the value of a related complex that included apartments, offices, high-end shopping, a casino and a luxury hotel, which he also intended to develop. Ng and others involved were arrested before the center was built.