Nigeria | With rescue near, Boko Haram stoned girls to death 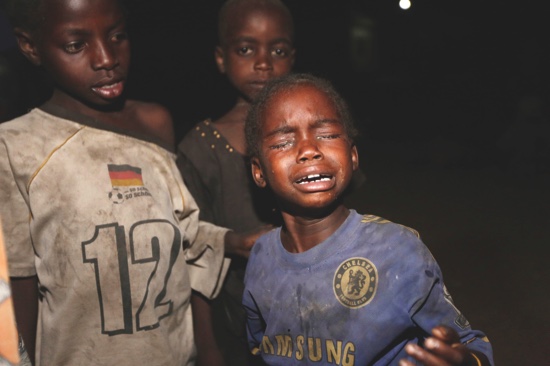 A child rescued by Nigerian soldiers from Boko Haram extremists at Sambisa Forest cries after arriving with others at a refugee camp in Yola, Nigeria

Even with the crackle of gunfire signaling rescuers were near, the horrors did not end: Boko Haram fighters stoned captives to death, some girls and women were crushed by an armored car and three died when a land mine exploded as they walked to freedom.
Through tears, smiles and eyes filled with pain, the survivors of months in the hands of the Islamic extremists told their tragic stories to The Associated Press on Sunday, their first day out of the war zone.
“We just have to give praise to God that we are alive, those of us who have survived,” said 27-year-old Lami Musa as she cradled her 5-day-old baby girl.
She was among 275 girls, women and their young children, many bewildered and traumatized, who were getting medical care and being registered a day after making it to safety.
Nigeria’s military said it has freed nearly 700 Boko Haram captives in the past week. It is still unclear if any of them were among the so-called “Chibok girls,” whose mass abduction from their school a year ago sparked outrage worldwide and a campaign for their freedom under the hashtag #BringBackOurGirls.
Musa was in the first group of rescued women and girls to be transported by road over three days to the safety of the Malkohi refugee camp, a dust-blown deserted school set among baobab trees opposite a military barracks on the outskirts of Yola, the capital of northeastern Adamawa state.
Last week’s rescue saved her from a forced marriage to one of the killers of her husband, she said.
“They took me so I can marry one of their commanders,” she said of the militants who carried her away from her village after slaughtering her husband and forcing her to abandon their three young children, whose fates remain unknown. That was five months ago in Lassa village.
“When they realized I was pregnant, they said I was impregnated by an infidel, and we have killed him. Once you deliver, within a week we will marry you to our commander,” she said, tears running down her cheeks as she recalled her husband and lost children.
Musa gave birth to a curly-haired daughter the night before last week’s rescue.
As gunshots rang out, “Boko Haram came and told us they were moving out and that we should run away with them. But we said no,” she said from a bed in the camp clinic, a blanket wrapped around ankles so swollen that each step had been agony.
“Then they started stoning us. I held my baby to my stomach and doubled over to protect her,” she said, bending reflexively at the waist as though she still had to shield her newborn.
She and another survivor of the stoning, 20-year-old Salamatu Bulama, said several girls and women were killed, but they did not know how many. Michelle Faul, Yola, AP