Nigerian Amusan gets world record on wild night in hurdles 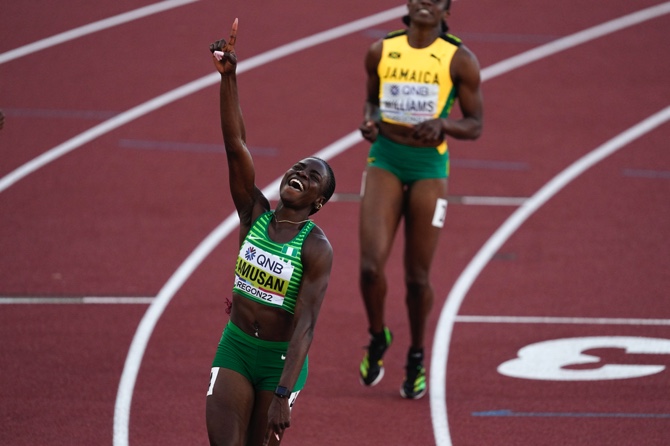 First she set the record. Then she won the medal.

Even if the order was awkward, Sunday night at world championships was beautiful for Nigerian hurdler Tobi Amusan.

She won the 100-meter hurdles title about 90 minutes after she opened the final session of the championships by breaking the world record in her semifinal heat with a time of 12.12 seconds.

“When I watched the record, I was like ‘Whoa, who did that?’” Amusan said of her reaction upon seeing her time pop up on the scoreboard.

It was a strange sequence of events for the 25-year-old, who finished fourth at the Tokyo Games last year and fourth at the last world championships in 2019, and now has a place in history as a champion, record-holder and main character in a most unusual night.

The mark surpassed the six-year-old record held by American Keni Harrison by .08.

“Unbelievable,” said Switzerland’s Noemi Zbaren, who watched the record while she was waiting for her own semifinal. “I had goosebumps when I saw it in the call room.”

Back on the track for the final, Amusan won the gold medal in an even faster time — 12.06 seconds, but the wind was too strong, so that didn’t go down as yet another record.

For the earlier race, she received a $100,000 bonus for setting the mark at worlds.

It’s rare, but not unheard of, for a track athlete to set a record before the biggest race. Florence Griffith-Joyner ran her still-standing record 10.49 in the 100 meters in a prelim at the 1988 Olympic trials.

“I believe in my abilities but I was not expecting a world record at these championships,” Amusan said. “The goal is always just to execute well and get the win.”

Amusan went to college at Texas El-Paso. A person familiar with her career told The Associated Press she had been training partners with another Nigerian UTEP alum, Blessing Okagbare.

Okagbare is currently serving an 11-year ban for multiple doping violations, stemming from a federal investigation into an El Paso doctor who is accused of distributing human-growth hormone and other banned substances.

The person providing the information to the AP spoke on condition of anonymity because Amusan is not connected to that case.

After her history-making night, there was nothing but appreciation for the new record holder and new world champion.

“I know what Tobi has gone through over the years. She’s been fourth twice,” said Jamaica’s Danielle Williams. “I know it’s not an easy position. She’s been close to throwing (in) the towel. To see her come out here and do this right now, it’s amazing.” EDDIE PELLS, EUGENE, MDT/AP