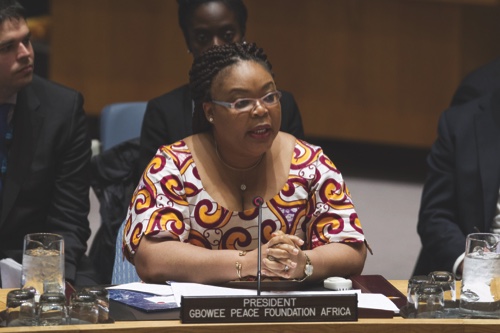 Nobel peace laureate Leemah Gbowee told the Security Council yesterday (Macau time) that people across the world are living in fear and she urged the U.N.’s most powerful body to take action to reduce inequality and promote inclusiveness.
The Liberian peace activist painted a grim picture of a more dangerous world where the lives of rich and poor of all races and political beliefs are affected.
“All of the things that made life meaningful to us (are) gradually being taken away by insecurity,” Gbowee said in a keynote address at a council meeting on the importance of “inclusive development” in promoting peace. “The joy of getting on the airplane is gone. The freedom to worship when, where and how we choose is gone. Education especially for girls is under threat.”
“Freedom of expression, freedom of the press as we saw in Paris is also a thing of the past,” she added, referring to the recent terror attacks that killed 17 people at the satirical newspaper Charlie Hebdo, a kosher grocery and elsewhere in the French capital.
Saying this may be the only time she gets to address the Security Council, Gbowee urged its 15 members “to do some deep self-reflection” and undertake reforms, including expanding the number of its permanent veto-wielding members from five to seven.
“Militarism is viewed as the primary solution to every local national and international problem regardless of what the problem is,” Gbowee said. “In order to achieve international peace and development, we need to change the systems and structures that make it impossible for others to try where others are succeeding.”
The Security Council approved a presidential statement highlighting “the importance of identifying and addressing social, economic, political, cultural and religious exclusion, intolerance, as well as violent extremism, which can be conducive to terrorism, as drivers of conflict.”
It encouraged all 193 U.N. member states to come up with a common U.N. approach to promote development for all peoples and enlist local communities and non-governmental organizations in developing strategies “to counter the violent extremist narrative that can incite terrorist acts.”
The meeting drew criticism from the Group of 77, representing 132 mainly developing countries, which accused the council of encroaching on the mandate of the 193-member General Assembly and other U.N. organs to address development issues.
South Africa’s U.N. Ambassador Kingsley Mamabolo, whose country chairs the group, criticized richer nations for failing to honor commitments to provide aid to developing countries, for not providing debt relief to poor countries, and for failing to open markets and transfer technology to developing countries.
Chile’s President Michelle Bachelet, whose country currently holds the Security Council presidency and chose the topic for Monday’s debate, countered that the council was the right place because “social inclusion and inclusive development are the conditions for peace.”
“Latin America, which is the region of the world with the most inequality, is also the region with the highest homicide rate and one of the regions most affected by drug trafficking and organized crime,” she said. Edith M. Lederer, United Nations, AP