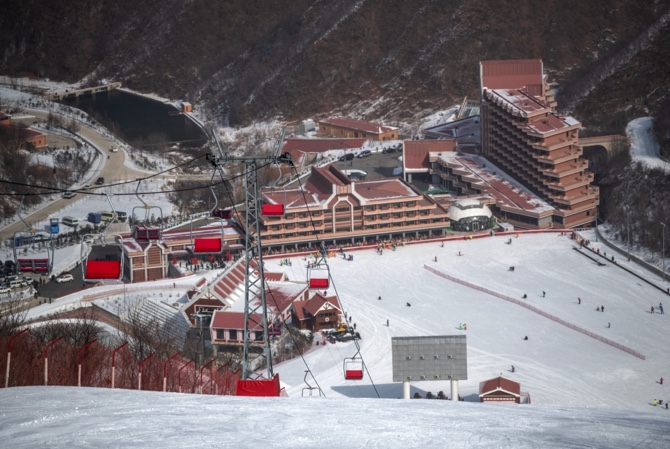 Climate change and the coronavirus are threatening Kim Jong Un’s ambition to ski his way out of international sanctions.

The North Korean leader, who once went to school in Switzerland, has made tourism a centerpiece of his economic vision since taking power almost a decade ago, building ski resorts to attract winter-sports enthusiasts and hard currency.

But with the coronavirus spreading in China, Kim has shut the border to his neighbor, cutting off the largest group of tourists to North Korea. Worse still, like other snow centers from the French Alps to Japan, North Korea is falling victim to changing Arctic weather patterns that are warming winters and reducing the levels of snow on lower slopes.

North Korea, a mountainous country roughly at the same latitude as Colorado, reported this month that higher-than-usual temperatures are causing “abnormal climatic phenomena.” South Korea’s weather office says average temperatures in its northern neighbor will probably rise 15% by 2040 from 1981-2010 levels.

“North Korea will face the same challenges posed by global warming,” said Kong Woo-seok, a geography professor at Seoul’s Kyung Hee University. “The question lies in whether each country has the infrastructure and the social system to cope with these changes. In this regard, North Korea could be more vulnerable than others.”

Kim built his first ski resort in an eastern valley called Masikryong in 2013, two years after taking power, and has visited the coastal area frequently. He plans to extend the project to a 260-mile-long tourism belt that would cost almost $8 billion in the next five years.

Masikryong, with just 17 kilometers of slopes, has a top elevation of 1,363 meters, putting it at the same height as some of the lower slopes in Europe, and more than 2,000 meters below the top of Aspen in Colorado.

The North Korean complex came under the spotlight in 2014 when the nation released a photo of Kim taking a solo ride up the mountain on a three-decade-old chair lift supplied by China after sanctions had reportedly blocked Western companies from selling luxury equipment to the country.

Guests of the resort have included former NBA star Dennis Rodman and Japanese pro-wrestler-turned-lawmaker Antonio Inoki. Last year, a group of South Korean skiers went there for training ahead of South Korea’s Pyeongchang Winter Olympics as part of reconciliation efforts.

Christian, a 39-year-old skier who asked to be identified only by his first name for fear of being banned from North Korea, said his trip to Masikryong a year ago almost got canceled because the resort told him it might close due to a “really bad snow season.”

“We were lucky that the resort was open when we got there,” he said by email.

Masikryong isn’t North Korea’s only ski resort. Near the town of Samjiyon bordering China, where residents celebrate winter with ice sculptures that resemble everything from missiles to torches, North Korea is hoping to finish rebuilding another complex by the end of this year.

And in Yangdok, a snowy town 60 kilometers northeast of the capital Pyongyang, Kim attended a ribbon-cutting ceremony in December to mark the completion of a third facility, featuring hot springs and a horse racetrack. Two months later, a North Korean website said residents of the town were “enjoying happiness and civilization not imaginable even in the Garden of Eden.”

Kim’s enthusiasm for luxury resorts isn’t just about propaganda. The growing number of tourists from around the world seeking new adventures, and the rapid increase in international travelers from neighboring China present a valuable potential source of foreign reserves.

A seven-night trip including visa, return flights from Beijing on Air Koryo and accommodation in Pyongyang and Masikryong costs from 1,495 Euro ($1,632), according to travel company Uri Tours Inc.

Some 200,000 Chinese tourists visited North Korea in 2018, a North Korean tourism official told Chinese news agency Xinhua. That number of Chinese visitors would spend a total of $152 million on average globally, according to calculations based on Nielsen data. Their contribution would be a sizable chunk of the $240 million the nation earned in exports.

While that number may drop this year due to the coronavirus outbreak, the economic potential remains large, with even the chance of South Korean visitors increasing.

His proposal quickly drew a U.S. warning to proceed with caution as it could end up breaching sanctions imposed on North Korea.

North Korea attracted more than 2 million South Korean tourists before the cross-border project ended in 2008, when a woman visiting a North Korean mountain resort was fatally shot after wandering close to a military facility.

Kim has renewed his emphasis on “self-reliance” since his failed summit with Trump, moving forward with tourism and other projects. He is mobilizing some of his 1.2-million Korean People’s Army to build resorts.

Stationary cable cars at the summit of the 1,360-metre Taehwa Peak at Masikryong Ski Resort.

Ralph, another skier from Germany who also wished to be identified by his first name for the same reason, visited Masikryong in March 2018 and said the resort was on a par with his favorite destinations in Switzerland, Germany and Japan. He said the threat of global warming was “on the same level as lower-lying small European ski resorts.”

“Hopefully for Korea it will get more relaxed and more people will be able to enjoy it,” he said. “I would truly love to go back there.” Heesu Lee and Sam Kim, Bloomberg