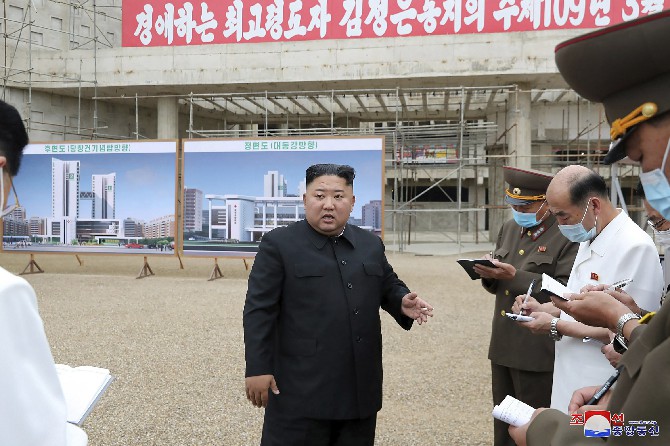 North Korean leader Kim Jong Un berated construction managers for unspecified problems in building a showpiece hospital in comments reported yesterday that may indicate the country is struggling to secure the supplies amid U.S.-led sanctions and a coronavirus lockdown.
During a visit to the construction site in Pyongyang, Kim lamented that his ambitious project of building a new general hospital was being carried out in a “careless manner” and without a proper budget and ordered all officials responsible to be replaced, the North’s official Korean Central News Agency said.
The report said Kim accused construction managers of making a “serious digression” from the ruling party’s policy over the supply of materials and equipment by “burdening the people by encouraging all kinds of ‘assistance,’’’ which apparently indicated rising complaints among people who were mobilized for its construction.
The KCNA report didn’t say when Kim visited the site and didn’t mention any comments by Kim over stalled nuclear diplomacy with the Trump administration or international sanctions over his nuclear weapons program.
In announcing the plans to build the hospital in March, Kim made a rare acknowledgement that his country lacks modern medical facilities and called for urgent improvements in the country’s health care system.
However, the country hasn’t directly linked the hospital project to the coronavirus pandemic and has steadfastly maintained that no one in its territory has been sickened by COVID-19, a claim many foreign experts doubt.
Experts say the pandemic has hurt the North’s economy, already battered by stringent U.S.-led sanctions over its nuclear weapons and missile programs.
Kim desperately sought sanctions relief during a flurry of diplomacy with the United States in 2018 and 2019. But talks have faltered since his second summit with President Donald Trump in February 2019.
Experts say the COVID-19 crisis likely thwarted some of Kim’s major economic goals by forcing the country into a lockdown that shut the border with China, its major ally and economic lifeline, and potentially hampered his ability to mobilize people for labor. KIM TONG-HYUNG, SEOUL, AP