U.S. President Barack Obama yesterday lifted a half-century-old ban on selling arms to Vietnam during his first visit to the communist country, looking to bolster a government seen as a crucial, though flawed partner in a region he’s tried to place at the center of his foreign policy legacy.
Obama announced the full removal of the embargo at a news conference where he signaled a desire to leave behind the troubled history between the former war enemies and reward what he described as modest progress on human rights in the one-party state.
“At this stage, both sides have established a level of trust and cooperation, including between our militaries, that is reflective of common interests and mutual respect,” Obama said, adding that every U.S. arms sale would be reviewed case by case. “This change will ensure that Vietnam has access to the equipment it needs to defend itself and removes a lingering vestige of the Cold War.”
Obama is seeking to strike a balance with Vietnam, which he called a vital country in one of the world’s most vital regions, amid Chinese efforts to strengthen claims to disputed territory in the South China Sea, one of the world’s most important waterways.
Obama said the United States and Vietnam had mutual concerns about maritime issues and the importance of maintaining freedom of navigation in the South China Sea. He said that although Washington doesn’t take sides on the territorial disputes, it does support a diplomatic resolution based on “international norms” and “not based on who’s the bigger party and can throw around their weight a little bit more,” a reference to China. 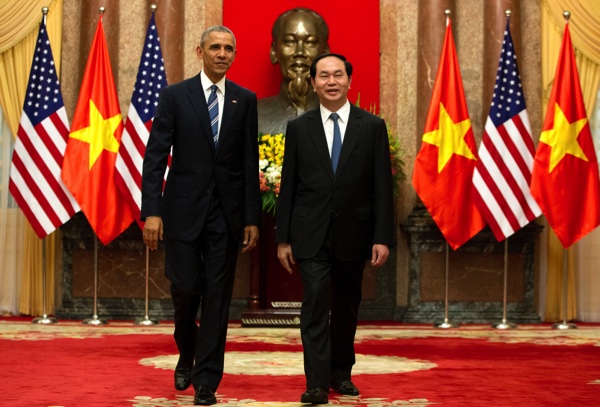 Barack Obama (left), and Vietnamese President Tran Dai Quang walk to a meeting after shaking hands at the Presidential Palace in Hanoi

Lifting the arms embargo will be a psychological boost for Vietnam’s leaders as they look to counter an increasingly aggressive China, but there may not be a big jump in sales. Vietnamese President Tran Dai Quang praised the expansion in security and trade ties between “former enemies turned friends” and called for more U.S. investment in Vietnam. He said there was enormous bilateral trade growth potential.
U.S. lawmakers and activists had urged the president to press the communist leadership for greater freedoms before lifting the arms sale embargo. Vietnam holds about 100 political prisoners and there have been more detentions this year.
Obama said the countries still have differences over human rights but noted modest improvements by Vietnam.
The United States partially lifted the embargo in 2014, but Vietnam wanted full access as it tries to deal with China’s assertive land reclamation and military construction in nearby seas.
After three days in Vietnam, Obama heads to Japan for an international summit and a visit to Hiroshima, where he will be the first sitting president to visit the site of the first atomic bomb attack.
He arrived in Hanoi, the capital, late Sunday, making him the third sitting president to visit the country since the end of the war. Four decades after the fall of Saigon, now called Ho Chi Minh City, and two decades after President Bill Clinton restored relations with the nation, Obama is eager to upgrade relations with an emerging power whose rapidly expanding middle class beckons as a promising market for U.S. goods and an offset to China’s growing strength.
Obama was greeted yesterday by Quang at the Presidential Palace. Obama congratulated Vietnam for making “extraordinary progress.” He said he hopes the visit will show a continued interest in strengthening ties in the years to come.
Obama will make the case for stronger commercial and security ties, including approval of the 12-nation Trans-Pacific Partnership trade agreement that is stalled in Congress and facing strong opposition from the 2016 presidential candidates. The deal, which includes Vietnam, would tear down trade barriers and encourage investment between the countries that signed it.
Critics worry it would cost jobs by exposing American workers to low-wage competition from countries such as Vietnam. They also say it would allow multinational corporations to challenge local laws by saying they violate the trade deal. Foster Klug, Hanoi, AP 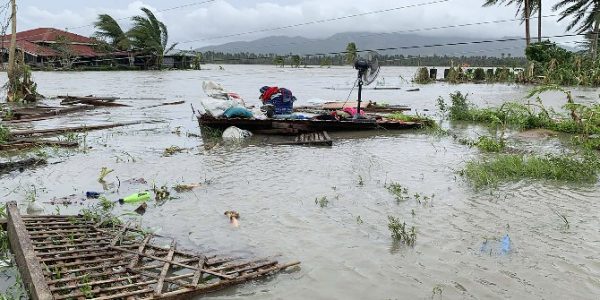