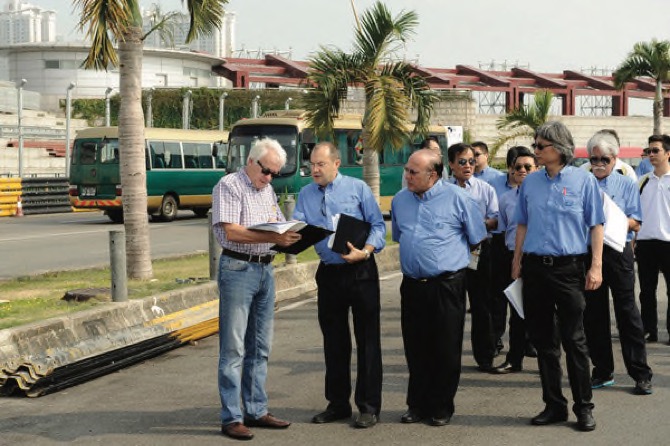 Charlie Whiting (left) inspecting a track in Macau in 2012

Aged 66, Whiting was a legend and charismatic personality of the sport that he loved the most.

The news of his death sent shockwaves around the globe, with messages of condolences and immediate homages delivered by several organizations and institutions that had involved Whiting as either a knowledgeable collaborator, a friend, or both.

Macau was no exception, with the Macau Grand Prix Organizing Committee (MGPOC) mourning the loss of Whiting through a condolence message sent to the FIA and a statement posted to its official website, which was also subdued with a monochromatic color.

In the message, the local committee said they would be “joining the global motorsport community in mourning the tragic loss of Charlie Whiting, expressing their deepest condolences to Charlie’s family and the many friends around the world, including those in Macau.”

The same statement also noted Whiting’s contribution to the Macau Grand Prix over the years, describing it as “immeasurable.”
In the words of the committee, “his guidance and expertise have helped ensure the Guia Circuit and the Macau Grand Prix have continued to meet and exceed the highest sporting and infrastructure standards,” continuing, “Macau will be forever grateful for Charlie’s dedication, professionalism and friendship.”

Despite his low-profile, Whiting was a relevant figure in presiding over the local GP, having performed several important roles such as race director and safety delegate throughout the years.

Questioned by the Times on his importance, Philip Newsome, historian and Macau Grand Prix expert writer said, “I think overall Charlie [Whiting] brought a level of professionalism and credibility to the event that hadn’t been seen before,” adding that, “he was respected and liked by everyone. He had a very calming influence, which will be sorely missed.”

Reflecting on how Whiting’s influence was felt on the Guia circuit, Newsome recalls how the decision to alter the track atLisboa and some other racing decisions are still topic of conversation today among the drivers and teams involved.

According to FIA’s official statement, the FIA Director of Formula One passed away as the result of a pulmonary embolism.
Whiting was in Australia to direct the Australian Grand Prix, which kicked off this year’s F1 season. He had been working at FIA since 1988 and had been a race director for the past 22 years.