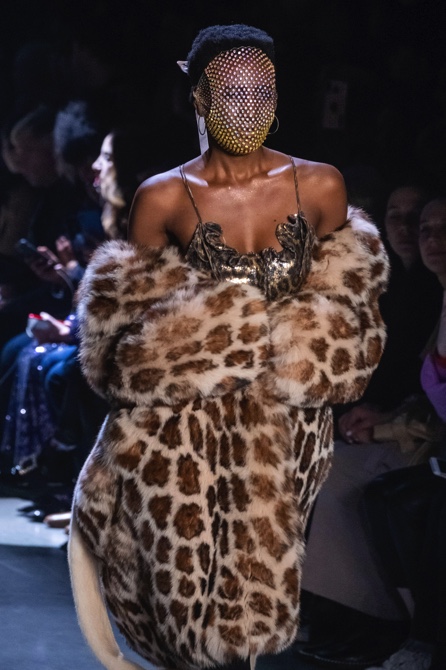 Christian Cowan equates showing his fashion collections with continuously living out a childhood dream.
“I’m always going to be so ecstatic every time I wake up and know I’ve got a show,” Cowan told The Associated Press before his fall-winter collection (pictured) rolled out this week at New York Fashion Week.
In a few short years, the 25-year British designer has developed a high-profile fan base within the artistic community. That sits well with him since he said it’s musicians and actresses who inspire him in the first place.
Cowan counts Lady Gaga, Beyoncé, and Keke Palmer among celebrities who have embraced his designs. And then there’s Cardi B. Cowan dressed the Grammy-winning recording artist for the cover of her debut album, “Invasion of Privacy.”
“It was early on and she asked me for a few outfits, and I loved her and loved her personality. … She only had a few tracks then and I loved them. So we loaned her looks and then we just built a friendship and a working relationship,” Cowan said.
As for latest collection, Cowan calls it the most evolved he’s ever done, right down to the custom fabrics and wide range of accessories.
“We are doing eyewear this season, we’ve got handbags, there’s many more layers. It’s just really evolving in its technique. It’s just a big wow factor, deep show,” Cowan said.
He worked in prints and earth tones rich in gold and brighter greens and put crystal-studded net face masks on some of his models. There was also a fair amount of black and purples. The collection showcased metallic and sequin mini-skirts, including a closing look with a gigantic bow on the back. In addition to bold pops of color, he included a head-to-toe leopard print look.
Cowan said he was inspired by various means of power, from natural and vivid to ritualistic and wealth. He explained some of the ways he chose to depict it: “Fireworks, which are a ceremonial aspect of power, and animal print, and ocelot, which is an animal-wear power.”
He’s also inspired by the powerful women who wear his designs.
“To see them enjoying my work, and kind of fueling what they do, is always, like, an honor,” Cowan said.
While fashion week this time around has been lighter in celebrities than previous years, Cowan drew a few, including singer-songwriter Tinashe and singer Orville Peck. Actress Lisa Rinna and her fashion model daughters, Delilah Belle Hamlin and Amelia Hamlin, were also front row guests.