Offbeat | Dentist vows to put racy Easter display back up 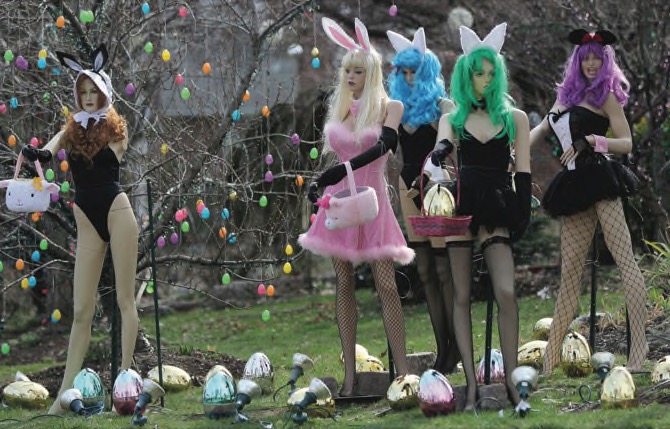 A New Jersey dentist who created a racy Easter display is vowing to put it back up after a female neighbor used gardening shears to damage it.

The display at a dental office in Clifton, New Jersey, featured five mannequins dressed in lingerie, fishnet stockings and colorful wigs, all holding Easter baskets and surrounded by Easter eggs. It had drawn mixed reviews from neighbors, as well as passers-by who stopped to take photos.

A television news crew was filming the decorations this week when the woman — who lives in a home across the street from the dental office and identified herself as Desire Mozek— took it down.

“I think I did something right,” she said. “That’s disgusting already.”

The owner of the display, Wayne Gangi, called it a “spoof.” He said the idea came to him when he saw giant Easter eggs while walking around a Party City store. He added that he liked Playboy bunnies when he was a child and thought the display would be funny.

Tom Mozek, who answered the door at the home where the woman lives, told The Record she is not his wife and her name is Desire Shepstone.

“I told her, ‘Don’t do it.’ She has to take responsibility for it,” he said, adding that she wasn’t available to speak to a reporter.

Gangi said he is in the process of filing a restraining order against the woman. Gangi said he thinks she appears to have been seeking attention rather than justice due to moral outrage.

Clifton police are investigating the incident, but it wasn’t clear yesterday if the woman will face any charges.