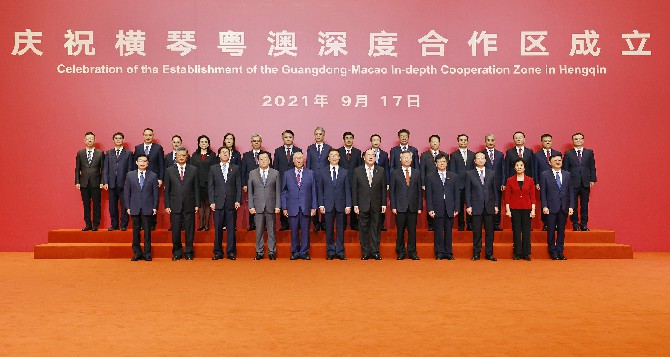 Officials on national and provincial levels officiated the ceremony over the weekend to inaugurate and celebrate the Guangdong-Macau In-depth Cooperation Zone in Hengqin.
The session highlighted a plaque-unveiling ceremony.
In his speech, Chief Executive (CE) Ho Iat Seng, who is also the director of the Administrative Committee for the Cooperation Zone, stressed that the establishment of the Cooperation Zone is a major decision made by the Central People’s Government on a strategic level.
Furthermore, he said that the Cooperation Zone is a major move in implementing Guangdong-Hong Kong-Macau Greater Bay Area and a crucial formation in achieving an in-depth reform and expanded opening.
It is also a great achievement stemming from the implementation of the “One country, two systems” principle.
According to Ho, the unveiling of the plaque symbolizes the full ignition and acceleration of the development of both the Cooperation Zone and Hengqin. He thanked the Central Government and the governments of Guangdong Province and Zhuhai City for their care, support and coordination.
After the inauguration ceremony, Ho visited the offices of the administrative entities and attended meetings with officials. He encouraged officials to handle the development of the Cooperation Zone well. Officials from both jurisdictions should learn from each other.

Vice Premier approves of Macau’s work
Prior to the inauguration ceremony of the Cooperation Zone, Vice Premier Han Zheng received the CE and affirmed the recent work of the SAR government.
Speaking during the meeting, Ho expressed his gratitude to the central government for its support, saying the SAR Government would spare no effort in making good use of the favorable policies that have been made available to Macau, in order to push forward the city’s adequate economic diversification.
Han said livelihood issues were of key importance for overall development. In that regard, greater effort should be made to innovate the models for social governance and public services. AL