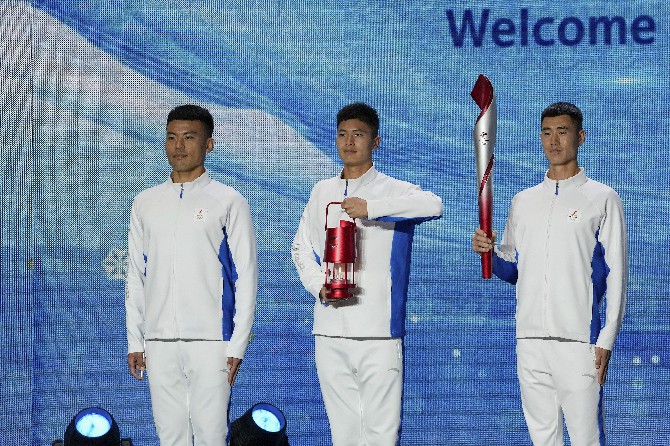 The Olympic flame arrived in Beijing yesterday amid calls from overseas critics for a boycott of the Feb. 4-20 Winter Games.
Beijing’s Communist Party Secretary Cai Qi, the top official in the Chinese capital, received the flame at a closely-guarded airport ceremony.
Beijing successfully hosted the Summer Olympics in 2008, although the event failed to produce the more open political and social environment in China that many had hoped for.
Activist groups disrupted the flame lighting ceremony in southern Greece on Monday, accusing the International Olympic Committee of granting legitimacy to rights abuses in China. IOC officials have said they are committed to seeing the competition go ahead and that rights issues are not part of their remit.
Speaking in the ancient stadium of Olympia, IOC President Thomas Bach said the Games must be “respected as politically neutral ground.”
Activists said human rights in China have deteriorated since 2008, claiming that the Summer Games “emboldened” China. Over those years, Communist Party leader Xi Jinping has consolidated power over virtually all aspects of Chinese society.
Beijing is the first city to be awarded hosting rights to both the Summer and Winter Games, largely as a result of the reluctance of European and North American cities to bid for the 2022 edition.
China says spectators from outside China won’t be allowed to attend the Winter Games because of the COVID-19 pandemic, and athletes must remain in a bubble to guard against the spread of coronavirus. China has largely stamped-out domestic transmission of the disease, the first cases of which were detected in the central Chinese city of Wuhan in late 2019.
At yesterday’s flame handover ceremony, Deputy Beijing Mayor Zhang Jiandong said the city was committed to holding a “simple, safe and excellent Games.”
China and the IOC have collaborated to design a truncated torch relay that reduces the number of routes and personnel involved, Zhang said.
“We insist on prioritizing public health and safety, and coordinate the torch relay with pandemic control and prevention requirements,” Zhang said.
The flame will be placed on display over the next few months, with a three-day relay scheduled to start Feb. 2, involving around 1,200 torchbearers in Beijing, suburban Yanqing and Zhangjiakou in neighboring Hebei province where ski jumping and other outdoor events will be held. MDT/AP